250,000 pounds of Big Imagination--Ready to Take Flight at Burning Man

Burning Man is a collaborative mecca for tech mavens, innovators and artists so it was important to weave those elements into the publication of the poem. -David Tomas Martinez & Lauren Monahan

BLACK ROCK CITY, NV, August 25, 2017 /24-7PressRelease/ -- The Big Imagination Foundation transformed a plane destined for the scrapyard into an immense art installation that's 1/2 a football field long, 5 buses wide and 2 stories tall, and will now briefly serve as a medium for publication starting the night of August 30.

As part of The 747 Project this year, Big Imagination invites Burning Man participants to send ideas from leading poets, thinkers and Burning Man citizens to the clouds and create the first-ever collective fine art poem to be initially published via social media: "Meditation on Flight at Burning Man." (curated by NEA award-winning poet David Tomas Martinez and Lauren Monahan).

Big Imagination asked writers to ponder the notion of "flight" and gift a line to the collective poem. These lines will be available to be photographed and uploaded both individually and collectively, alongside the 747 and projected across the length of the plane.

"Meditation on Flight at Burning Man" will begin to be published the night of Wednesday August 30 at #747poem and those not attending Burning Man are invited to join in on the fun by following/re-tweeting/sharing their favorite lines or adding their own at #747poem.

The Big Imagination Foundation is a nonprofit that fuels bold, visionary and inspiring projects for the betterment of humanity. As Big Imagination's first initiative, we're converting a Boeing 747-300 jumbo jet into an immense art installation for Burning Man.

Transporting the plane to Black Rock City is a major feat in itself: a fleet of trucks carrying cargo so wide that the highways need to be shut down for them to pass; police escort for the entire journey; two state lines crossed; and over 500 miles traveled.

This is a project build by hundreds, funded by thousands and shared by millions. And at Burning Man, everyone is welcome aboard. The flight of the 747 will be Burning Man's newest iconic ritual--as we look forward to the future with a symbol of connectivity, the wonders of human achievement, and what can happen when we dream big.

The 747 experience is an interactive art project designed to inspire personal growth and change. Pass through the a TSA of Total Self Acceptance. Drop off your Emotional Baggage. Decide where your journey will take you next--and fill out a Boarding Pass.

We've spent the past two years testing and perfecting this experience. Thousands have already gone through the plane, received their wings and left with personal realizations, stories and memories they'll never forget.

From the Director of Big Imagination:
"If we dream big, we can make the impossible possible." - Ken Feldman 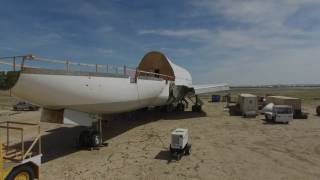