Ms. Hinkle has written several books on the topic of naval warfare

WATERFORD, CT, November 07, 2017 /24-7PressRelease/ -- Marion Hinkle has been included in Marquis Who's Who. As in all Marquis Who's Who biographical volumes, individuals profiled are selected on the basis of current reference value. Factors such as position, noteworthy accomplishments, visibility, and prominence in a field are all taken into account during the selection process.

As the president and chief executive officer emerita of Sonalysts, Inc., Muriel Ruth Nelson Hinkle has built her success from the bottom up in a true example of a woman rising through the ranks to achieve the American dream.

Muriel started her career by attaining a Bachelor of Arts from the University of Maryland in 1951. She then became a ticket agent with Eastern Air Lines, and she held that role until 1954. Growing up in Connecticut, Muriel had a passion for horse riding, so her next position was an extension of that hobby. She became a manager of Wildacres Thoroughbred Horsefarm, located in Waterford, Connecticut. Ten years later, Muriel felt called to yet another industry, this time the fast-paced world of information technology. She became an illustrator of naval warfare predictions and computer simulated naval engagements through Analysis & Tech., Inc., located in North Stonington, Connecticut. The three years that Muriel spent with Analysis & Tech would shape the rest of her career. She branched off in 1973 to become the president of Sonalysts, Inc., where she would remain until the present day.

Throughout her career, Muriel has bolstered her knowledge and understanding of the principles of information technology, particularly with regard to sonar. She has written several books on the subject, including "Scope of Acoustic Communications Systems in Naval Tactical Warfare," "Non-Acoustic Anti-Submarine Warfare," "Nuclear Weapons Effects in Anti-Submarine Warfare" and "Measures of Effectiveness, Naval Tactical Communications." Her expertise was also furthered by her late husband, David Hinkle, who was himself an expert in sonar technology. He performed research and development for the United States Air Force, among other organizations.

Muriel has received a number of awards and accolades throughout her career, including a commendation for services to submarine force Commander Submarine Squadron Ten in 1973, a Small Business Administration New England Contractor of Year Award in 1986, a Small Business Administration Adminstrator's Award for Excellence in 1985 and 1986, and a Business Associate of the Year Award from the Naval Institute in 1999. She has also earned a Distinguished Community Service Award from Mitchell College in 2001 and a William Crawford Distinguished Service Award from her local Chamber of Commerce in 2002.

When asked about the people who inspired her most, Muriel was quick to name her parents, Andrew and Florence Nelson. Andrew, a Scottish immigrant, came to the United States when he was 10 years old. There, he came into his own as a lawyer and CPA, and he taught accounting at St. John's University. His wife, Florence, took care of her children. She loved gardening, and taught her family the value of honesty, which Muriel still prizes to this day. She offers the following advice to future generations: strive to become the best at what you do, but don't forget to have fun along the way.

Looking back, Muriel is proud to leave her three children with a successful and accomplished legacy. As the head of a growing business, she has made a lasting impact on her clients, as well as the employees who work diligently to further the mission of Sonalysts, Inc. While she is proud of her achievements, Muriel nevertheless feels that her best days are still to come. 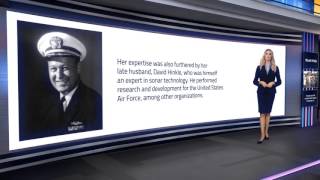