Louvell Anderson Honored by Marquis Who's Who for Excellence in Theology

Dr. Anderson has been in ministry for more than 60 years

His message of love and inclusion has taken him throughout the United States and overseas to Poland, Germany, Russia, France, the United Kingdom, and Greece.

CRETE, IL, June 11, 2018 /24-7PressRelease/ -- Louvell Anderson has been included in Marquis Who's Who. As in all Marquis Who's Who biographical volumes, individuals profiled are selected on the basis of current reference value. Factors such as position, noteworthy accomplishments, visibility, and prominence in a field are all taken into account during the selection process.

As an evangelist and sought-after speaker, Dr. Anderson has ministered to churches and religious organizations around the world. His message of love and inclusion has taken him throughout the United States and overseas to Poland, Germany, Russia, France, the United Kingdom, and Greece. He has also ministered to people in Caribbean nations and witnessed the spiritual transformations of many during these excursions. In addition to directing and planning national community-based projects, he has participated in volunteer missions and helped to restore the faith of many.

The recipient of a Bachelor of Arts from the University of New Mexico, a Master of Theology from Logos Christian College and Graduate School, and a Doctor of Divinity from Trinity Hall College and Seminary, Dr. Anderson has taught and preached the gospel for more than 60 years. He is a former public school teacher and consultant in the states of Louisiana and California who has dedicated his life to teaching and inspiring others, whether in a formal education setting or through fellowship with the religious community. For 26 years, he served as bishop and overseer of Old Camp Ground before being elevated to the Office of Apostle under Apostle Don Webber.

Dr. Anderson has written and published three books, "Two Women to Avoid in the 21st Century and One Woman to Embrace into Eternity," "The Adventure of Prayer & Forgiveness – Through Spiritual Warfare," and "The Test of the Anointed Leadership in the Pulpit to combat the Wolf, the Dog, and the Pig and the Little Foxes that Spoil the Vines." He has also composed several inspirational booklets and guides that include messages about leadership, prayer and faith, and appeared on television and radio programs.

In recognition of his leadership ability and contributions to his industry, Dr. Anderson has received numerous citations from local and state government officials, as well as letters of appreciation from Presidents Ford, Bush, and Clinton. He was also selected as one of the nation's foremost public speakers by the American Banking Institute and has been included in numerous editions of Who's Who in the World. Dr. Anderson and his wife, Dr. Gladys J. Anderson, pastor of Rhema Outreach Community Worship Center, share five children and 20 grandchildren. 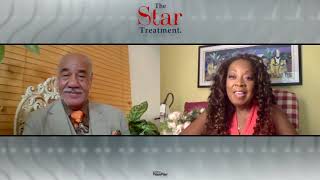