John Schulian Cultivated a Wide Audience as a Sports Columnist, Screenwriter and Author

Mr. Schulian always followed his passion for literature, combining it with a talent for sports

As a sports columnist, screenwriter and author, John Neilsen Schulian has enjoyed a prolific career, touching the lives of millions of viewers and readers alike through his various projects.

PASADENA, CA, March 18, 2019 /24-7PressRelease/ -- John Schulian has been included in Marquis Who's Who. As in all Marquis Who's Who biographical volumes, individuals profiled are selected on the basis of current reference value. Factors such as position, noteworthy accomplishments, visibility, and prominence in a field are all taken into account during the selection process.

As a sports columnist, screenwriter and author, John Neilsen Schulian has enjoyed a prolific career, touching the lives of millions of viewers and readers alike through his various projects. An only child, Mr. Schulian was the first in his family to surpass an eighth-grade education. Although his parents were very intelligent people, they did not have the opportunities that they would pass along to their son. In his youth, he naturally gravitated toward reading, writing, and watching movies. To keep him busy on the weekends, his father would take him to a theater in Inglewood, CA that played second-run classic movies, where he was able to get an education in the arts without even realizing it. He was also fortunate to grow up around Hollywood during the time he did.

Mr. Schulian had the best of both worlds in high school. He played on the football and baseball teams and he was the sports editor of the school paper during his senior year. He also took a journalism class but his peers thought of him as an athlete, not a writer. When he was a junior, there were a few seniors on the football team who would read classic books and they made it acceptable to be a jock who was interested in books, so that influenced him toward the career he chose.

Mr. Schulian started his career as a copy editor with The Salt Lake Tribune in 1968. There, he gained a hands-on knowledge of journalism that would serve him in his next roles as a reporter for The Baltimore Evening Sun and a sportswriter for The Washington Post. In 1986, he joined Miami Vice as a staff writer, eventually becoming a story editor, as well. He also served as a story editor for The Slap Maxwell Story and "Wiseguy," a television series in 1988. By 1989, he had become a producer, working on such television series as "Midnight Caller" and "Reasonable Doubts." Mr. Schulian served as a creative consultant for "The Untouchables," a television series that premiered in 1992, and he also worked on "Hercules: the Legendary Journeys" and its spin-off, "Xena: Warrior Princess."

Mr. Schulian continued his work as an associate producer of the documentary, "Ben Johnson: Third Cowboy on the Right" in 1996. He also worked as a writer and producer of the acclaimed anthology series "The Outer Limits," as well as a co-executive producer of "Tremors" television series, based on the "Tremors" series of films. By 2010, Mr. Schulian had diversified into written publications, as the editor of "The John Lardner Reader," a nonfiction anthology, in 2010, and the author of a nonfiction collection titled "Sometimes They Even Shook Your Hand." He was the co-editor of "At the Fights," another nonfiction anthology, and he wrote a novel, "A Better Goodbye," in 2015.

In recognition of his numerous impressive achievements, Mr. Schulian received accolades befitting his accomplishments. In 1979 and 1982, he was the recipient of a column writing award by the Associated Press Sports Editors. He also received a National Headliners Club Award in 1980. He received Best Sports Stories Awards in 1983 and 1984. In 1985, he received the Nat Fleischer Excellence in Boxing Journalism Award from the Boxing Writers Association of America. His most recent awards include the PEN/ESPN Lifetime Achievement Award for Literary Sports Writing, awarded by PEN America in 2016, and an induction into the Hall of Achievement of the Medill School of Journalism in 2018.

Eighteen months after he started at The Post, Mr. Schulian was hired as a sports columnist at the Chicago Daily News. He considers this a big moment in his career because he got the chance to write a sports column, which was what he always wanted to do. After he did the column for one week, someone came up to him and said "how does it feel to be the best sports columnist in town?" From then, he knew he was very good at what he did.

Another highlight was in 1985, when he wrote a letter to Steven Bochco, the creator of "Hill Street Blues" saying he'd like to do what he did. Bochco wrote him back saying that he didn't think many journalists could go from writing for print to writing for the screen but if he was really interested he would send him scripts to study. Bochco also read his book, "Writers' Fighters and Other Sweet Scientists," and offered to have him write a script for a new show he was creating and so a year later he went out to 20th Century Fox to work with him.

John Schulian has experienced a career filled with exciting accomplishments, and he leaves behind a legacy of excellence and entertainment. It is his wish that future generations learn from his example and strive to make their own mark on the world in whatever way suits them best. 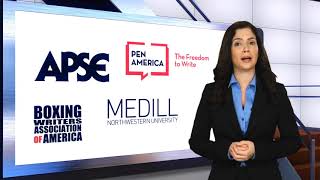