Dr. Smith became known across the Ivy League as a renowned educator

Roland Blair Smith II has spent a career preparing American students for their futures, a role he currently fulfills as an associate provost and adjunct professor of sociology at Rice University.

PEARLAND, TX, March 18, 2019 /24-7PressRelease/ -- Roland Smith has been included in Marquis Who's Who. As in all Marquis Who's Who biographical volumes, individuals profiled are selected on the basis of current reference value. Factors such as position, noteworthy accomplishments, visibility, and prominence in a field are all taken into account during the selection process.

A distinguished educator, Roland Blair Smith II has spent a career preparing American students for their futures, a role he currently fulfills as an associate provost and adjunct professor of sociology at Rice University.

Dr. Smith began his career with the foundation of a strong education, beginning with his Bachelor of Arts from Bowie State University in 1969. He then earned a Master of Public Administration from the School of Public and Environmental Affairs at Indiana University in 1976 and an EdD from the Graduate School of Education at Harvard University in 1988. Between his degrees, he completed postgraduate coursework in law and sociology at the University of Notre Dame from 1969-1970 and 1980-1981.

Throughout his education, Dr. Smith held roles as a research assistant, lending his talents to Bowie State University, as well as Senator Joseph Tydings and the City of South Bend, Indiana. In 1983, he joined Harvard University as an administrative intern for its graduate school of education. Around the same time, he held several roles with the University of Notre Dame. By 1997, his name was known throughout the Ivy League, and he ventured forth to pursue a role with Rice University, where he remains to this day.

Dr. Smith served as a guest lecturer at Brown University, and he was invited as a speaker for the New England Association of Educational Opportunity Program Personnel in 1985. He was also recruited as a consultant and trainer at the Educational Opportunity Fund Program at the Project Director's Development Institute, a subsidiary of New Jersey's Department of Higher Education in 1989.

Looking back, Dr. Smith became involved in his profession as an undergraduate student in Maryland. It was 1968, and he was elected vice president of his college student body. This was during a time of great turmoil on campus, as the governor of Maryland was attempting to take funding away from historically black universities. Dr. Smith and others protested on campus, and were eventually arrested and thrown in jail. While there, Dr. Smith was asleep, and was awoken with the news that Martin Luther King, Jr. had been killed. That whole experience was a critical point in his life, and set him on the path he is on now.

In years to come, Dr. Smith intends to work to help more people from underrepresented groups into faculty and administrative positions. We wish him the best in this important work, and know that he will enjoy continued success in his endeavors. 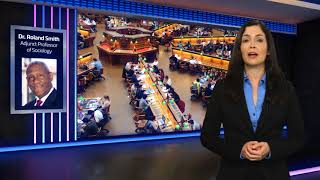