A. Max Weitzenhoffer Presented with the Albert Nelson Marquis Lifetime Achievement Award by Marquis Who's Who

Mr. Weitzenhoffer has been endorsed by Marquis Who's Who as a leader in the arts and entertainment industry

NORMAN, OK, October 01, 2019 /24-7PressRelease/ -- Marquis Who's Who, the world's premier publisher of biographical profiles, is proud to present A. Max Weitzenhoffer with the Albert Nelson Marquis Lifetime Achievement Award. An accomplished listee, Mr. Weitzenhoffer celebrates many years' experience in his professional network, and has been noted for achievements, leadership qualities, and the credentials and successes he has accrued in his field. As in all Marquis Who's Who biographical volumes, individuals profiled are selected on the basis of current reference value. Factors such as position, noteworthy accomplishments, visibility, and prominence in a field are all taken into account during the selection process.

A talented, independent, theatrical producer, Mr. Weitzenhoffer is the longtime president of Weitzenhoffer Productions, Ltd., in New York City and London since 1965. He is also chairman and co-owner of Nimax Theatres since 2005, a London theater group. Mr. Weitzenhoffer notably owns six of London's playhouses: the Apollo Theatre, the Garrick Theatre, the Duchess Theatre, the Lyric Theatre, the Vaudeville Theatre and the Palace Theatre. All six of his theaters are located in the West End of London.

Mr. Weitzenhoffer spent many years on Broadway in New York City before making his way to England. Some of his many productions included "A Moon for the Misbegotten" with Kevin Spacey, "One Flew Over the Cuckoo's Nest" and "Swimming with Sharks" with Christian Slater, and "Who's Afraid of Virginia Woolf" starring Kathleen Turner. In recent years, he produced "A Little Night Music" with Catherine Zeta-Jones and Angela Lansbury.

Outside of his work in theater, Mr. Weitzenhoffer is president and chief executive officer of the Seminole Manufacturing Company. He formerly lent his expertise as chief of public relations for the Oklahoma Health Department and was an adjunct professor of drama at the University of Oklahoma.

A visionary and leader in his field, Mr. Weitzenhoffer has served as trustee of the American Academy of Dramatic Arts, vice president of New Dramatists, Theatreworks and Theatre Investment Fund in London and treasurer of the Stage Directors and Choreographers Foundation, Inc. He also served locally on the board of regents at his alma mater, the University of Oklahoma, Cameron University and Rogers State University. At the University of Oklahoma, Mr. Weitzenhoffer was instrumental in providing major support for the athletic department, the college of fine arts and the schools of drama and art, and was responsible for creating the department of musical theatre, which bears his name.

Mr. Weitzenhoffer received a Bachelor of Fine Arts in 1961 and an honorary doctorate in 2000 at the University of Oklahoma. While pursuing his bachelor's degree, he was very active in the theater department, where he acted and designed and built sets. Soon after he graduated, he began his career as a co-manager of the La Jolla Playhouse in California between 1963 and 1964 before becoming a director at the David B. Findlay Gallery in New York between 1965 and 1969.

Among other professional organizations, Mr. Weitzenhoffer is a member of the Society of London Theatres, the American League of Theatres and Producers and the Players Club.

Most notably, Mr. Weitzenhoffer received two Tony Awards, one for Best Musical and one for Best Revival. He also won The Will Rogers Follies and Dracula on Broadway, several Drama Critics Awards and an Olivier Award, which is Britain's equivalent of a Tony Award. Mr. Weitzenhoffer was inducted into the Oklahoma Hall of Fame in 1994, received many awards from the University of Oklahoma and has been regularly named among the Top 10 Most Important Individuals in British Theater by The Stage newspaper. A celebrated Marquis listee, Mr. Weitzenhoffer has been featured in over 20 editions of Who's Who, including Who's Who in America, Who's Who in Entertainment and Who's Who in the World.

In recognition of outstanding contributions to his profession and the Marquis Who's Who community, A. Max Weitzenhoffer has been featured on the Albert Nelson Marquis Lifetime Achievement website. Please visit www.ltachievers.com for more information about this honor. 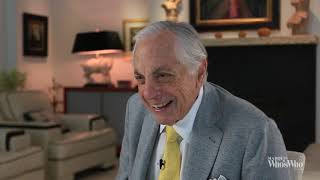