Henry Holmes Honored for Success as an Entertainment and Sports Attorney, Filmmaker and Civil Rights Activist

Looking to the future, Henry Holmes hopes to leave his son, Ben, with the legacy of a cleaner planet, a justice system that lives up to its name and a truly integrated and diverse society.

LA JOLLA, CA, December 04, 2019 /24-7PressRelease/ -- Henry Holmes has been included in Marquis Who's Who. As in all Marquis Who's Who biographical volumes, individuals profiled are selected on the basis of current reference value. Factors such as position, noteworthy accomplishments, visibility, and prominence in a field are all taken into account during the selection process.

An attorney, film and television producer, manager and creative consultant, Mr. Holmes has never been one to back down from a challenge. From his early life, he recalls an instinct for challenging authority, an argumentative streak that would serve him well as the attorney and advocate he would eventually become. One incident that had a lasting impression on Mr. Holmes was when his friend and co-worker, whose father was a congressman, convinced him to violate the dress code of his place of employment and wear short pants, reasoning that his father's connections would allow them to avoid the consequences. As it turned out, his friend had miscalculated, and his father insisted instead that the employer stick to his decision that both should be fired for their actions. This experience taught Mr. Holmes a valuable lesson about power and how to use it. Despite the negative circumstances, he could not help but be impressed by his employer's handling of the situation with the utmost professionalism and courtesy. He would later learn that his employer was both a lawyer and a businessman, and so that is what Mr. Holmes aspired to become from that point on.

As a first step toward achieving his goal, Mr. Holmes earned a JD from the School of Law at the University of California Berkeley in 1969. As an attorney in California, Mr. Holmes soon found himself representing famous clients, such as Billie Jean King, the former women's No. 1 tennis player, in 1981. He also became an advocate for women's rights, and his strong defense of Ms. King in her so-called "galimony" suit made him a known name in the legal community. From there, he would go on to represent other celebrity clients, most notably George Foreman, Academy Award winning filmmakers Anfonso Cuaron and Guillermo del Toro, and legendary film producer Robert Evans. Mr. Holmes describes his representation of Mr. Foreman as a turning point in his career, one of the "big breaks" that led him to where he is today.

Mr. Holmes is one of the few representatives who have held for his clients the World Heavyweight Boxing Championship belts, the World Championship Wrestling WWE belt, the UFC Middleweight Championship belt, Olympic Gold and Silver Medals, Academy Award Oscars, Golden Globe Awards, British Academy Awards, a Platinum Record for "We are the World," a US Open trophy, the Davis Cup trophy, the World Team Tennis Championship trophy, ESPYs, and the US Open Surfing Championship Trophy. He has had the honor to meet and be involved with many people who have made a substantial and major impact on the world. To his knowledge, he was one of the first attorneys to combine his practice with sports and entertainment as pme discipline, recognizing that sports is also entertainment.

On a personal level, Mr. Holmes is very proud to have been blessed with a wonderful family, including his wife, Lori, and his son, Ben, who he is very proud of in many ways. He considers his mother to be one of his biggest inspirations. She was a first-generation Italian immigrant who instilled him with a sense of respect and empathy for others, not to mention the values of hard work. She was a supporter of Martin Luther King, Jr., and she taught Mr. Holmes from a young age the value of respecting and fighting for diversity and fair treatment for everyone.

Mr. Holmes was inspired by a number of professionals, activists and family members throughout his life. He specifically mentioned Chief Justice Earl Warren, Dr. Martin Luther King, history professor Brice Harris III, Constitutional law professor Jesse Choper, his mother, Sue Cerullo Holmes, George Foreman, Buzz Aldrin and Billie Jean King. He cites Medgar Evers, a civil rights activist, who was assassinated at a young age for his beliefs, as a particular source of inspiration. He also mentioned his brother, John Holmes, who fought through many hardships, and who he describes as "the light of our lives." Additionally, Guy Saperstein, a fellow attorney, fought fiercely for women's rights and civil rights, thus becoming another of Mr. Holmes' personal inspirations. Finally, he was inspired by his friend and dive partner, the famous underwater archaeologist and author, Sir Robert Marx.

Looking to the future, Mr. Holmes hopes to leave his son, Ben, with the legacy of a cleaner planet, a justice system that lives up to its name and a truly integrated and diverse society. To that end, he is proud to support projects such as the Women's Sports Foundation and the Innocence Project, which works to free prisoners who have been wrongfully convicted and imprisoned. He advises young people starting out to recognize and pursue every opportunity that becomes available to them. With a strong work ethic, tenacity and a little bit of luck, the doors to success can be more easily opened. Mr. Holmes believes that his career followed, was led by, and sometimes exceeded, his dreams. For example, he was always an avid reader, a movie buff and a big dreamer, his career and his dream led him to work with several Academy Award and Golden Globe winning directors and filmmakers, and to work on such special movies as "Roma" and "Pan's Labyrinth." As an avid boxing and sports fan, his career led him to represent over a dozen world and Olympic champions. 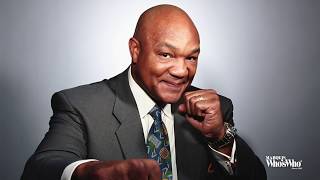