Dr. Stanley has transformed his unwavering passion for environmental science into groundbreaking research

Dr. Steven Mitchell Stanley's distinctive perspective on paleontology has distinguished him as an educator, author, geoscientist and researcher within his field.

BALTIMORE, MD, January 30, 2020 /24-7PressRelease/ -- Steven Mitchell Stanley, PhD, has participated in The Star Treatment, a prestigious video series hosted by renowned lawyer and television personality, Star Jones. This premier video series is extremely limited — Marquis Who's Who qualifies 500 listees on an annual basis for this elite service. Backed by a storied career in media that spans more than two decades, Star works closely with Marquis listees to assist with networking goals and commemorative efforts that can be shared with a worldwide audience.

Never one to paint himself in one box, Dr. Stanley's distinctive perspective on paleontology has distinguished him as an educator, author, geoscientist and researcher within his field. While he currently provides his vast wealth of knowledge to Florida State University, the Smithsonian Institution and the National Research Council, he views himself in a more unique light, describing his process as "[studying] fossils, but [I] also study living things in order to understand fossils… we're half-biologists and half-geologists." Refusing the title of a "woolly-headed academic," Dr. Stanley tells Star "I'm a fundamentally creative person, and that's what science is all about."

Growing up along the Chagrin River in Ohio, Dr. Stanley was immersed in his areas of interest at an early age, fostering his fascination with earth sciences by collecting rocks and minerals as well as through a book of stones, which remains on his shelf to this day. As his interests in the geology blossomed, he was exposed to paleontology during a biology course at Princeton University, where he ascended from a student on probation to a summa cum laude graduate over the course of his studies. Notably mentored by Al Fisher, a professor who later became a lifelong friend, Dr. Stanley sharpened his professional dexterity at the esteemed Yale University, from which he obtained his Doctor of Philosophy.

Expertly skilled in deductive reasoning, Dr. Stanley was an indispensable figure at the Johns Hopkins University for the majority of his career, imbuing his wisdom to future generations of paleobiologists and paleontologists in a variety of academic roles between 1969 and 2005. In conversation with Star, he recalls that he "started and ran the program on environmental policy, which had more than 250 students, including part-time and evening students. A lot of these students have good jobs in Washington now, and I'm proud of that." In addition to these admirable credits, Dr. Stanley has contributed to classrooms at such respected institutes of higher education as the University of Rochester and the University of Hawai'i at Mānoa.

Celebrated for his impactful efforts as the president of both the American Geosciences Institute and the Paleontological Society, Dr. Stanley's remarkable resume is as multi-faceted as it is substantial. His profound expertise has been skillfully utilized for a number of editorial boards and publications, including one of his proudest works, "Macroevolution: Pattern and Process" in 1979. "I had always wanted to make a contribution to evolutionary theory… which I developed and written into a book," Dr. Stanley elaborated to Star, adding, "That's the most important thing I have done in the sense that it had a big impact on biology as well as geology."

Affiliated with the Geological Society of America, the National Science Foundation and the American Academy of Arts and Sciences, among other venerated organizations, Dr. Stanley has turned heads throughout his industry with his prominent research on the influence of seawater chemistry on the skeletal growth of marine life over the past half billion years. Recognized as a fellow of the National Academy of Sciences and a Guggenheim fellow, he has also pioneered the invention of a new mathematical technique which assessed the impact of mass extinction as it relates to the perception of the Permian–Triassic extinction event. Nevertheless, Dr. Stanley hopes to cement his legacy within his personal accomplishments, sharing with Star "I'd like to be recognized for my research and writing, but I'd also like to be remembered as a kind, honest and good person."

In light of his superb professional achievements, Dr. Stanley has garnered myriad accolades from a variety of upstanding establishments and societies. Between 1968 and 2013, he was presented with such honors as the Bownocker Medal from the Ohio State University, the Charles Schuchert Award from the Paleontological Society, the Penrose Medal from the Geological Society of America and the James H. Shea Award from the National Association of Geoscience Teachers, to name only a few. Moreover, he has been recognized in myriad Marquis Who's Who volumes for many years, which he cites as "an honor… it does mean a lot to me." For his phenomenal endeavors in academia and beyond, Dr. Stanley is undeniably deserving of The Star Treatment! 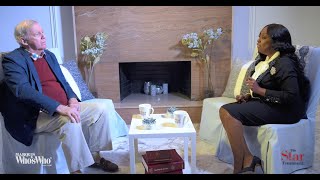