Dr. Andreae strives to better the healthcare landscape through his humane perspective on medical treatment

An inspiring leader in the ongoing treatment of Alzheimer's disease within North America, Dr. Daniel C. Andreae has been lauded for his tireless advocacy for neuroscience.

TORONTO, ON, January 30, 2020 /24-7PressRelease/ -- Daniel C. Andreae, EdD, LLD, has participated in The Star Treatment, a prestigious video series hosted by renowned lawyer and television personality, Star Jones. This premier video series is extremely limited — Marquis Who's Who qualifies 500 listees on an annual basis for this elite service. Backed by a storied career in media that spans more than two decades, Star works closely with Marquis listees to assist with networking goals and commemorative efforts that can be shared with a worldwide audience.

An inspiring leader in the ongoing treatment of Alzheimer's disease within North America, Dr. Andreae has been lauded for his tireless advocacy for neuroscience. Proudly integrating the necessary human elements of medicine in his award-winning academic practices and humanitarian efforts, his exceptional expertise extends to the treatment of autism, traumatic brain injuries, Tourette syndrome and Alzheimer's. Beyond treating the body, however, Dr. Andreae is focused on treating the mind as well, stating "I enjoy looking at the human condition from many angles because there are so many levels to individual subjects."

As personable as he is diligent, Dr. Andreae has been a boon to his community and colleagues as the first executive director of the Alzheimer Society of Toronto. Accepting this critical position when the organization was volunteer-run, he became committed to ramping up the Alzheimer Society of Toronto toward a professional level, an experience he describes as one of his biggest accomplishments. As a result, Dr. Andreae's incredible input lit a fire under the aforementioned society, as he tells Star, his involvement "allowed us to put together a counseling program, a resource center, raise money for advocacy and public education for the community, and support groups helping not only patients but caregivers as well."

Enhancing the quality of life for countless patients through his research, Dr. Andreae considers himself a motivator above all, citing "I want to make the world a better place and watch the ripple effects of whatever I can do through a classroom, an organization and, hopefully, society." In fact, he considers his innate ability to motivate as the bedrock of his legacy, having stimulated others to make advances in their fields, even in the most incremental ways. Notably leading a successful decade-spanning campaign to secure statutory legislation recognizing social work as a profession, Dr. Andreae finds his process to be immensely rewarding, sharing with Star that "we can never forget about the human element, and the ability to look at people through many different perspectives: biologically, feeling-wise, cognitively, socially and culturally."

Harboring a lifelong passion for learning, Dr. Andreae's exemplary professional endeavors have been spawned by a phenomenal accumulation of educational credits. Equipped with a Master of Social Work from Wilfrid Laurier University and a Doctor of Philosophy in adult education from the University of Toronto, he has formally studied at the Center for Mind-Body Medicine, the Benson-Henry Institute for Mind Body Medicine at Massachusetts General Hospital, Saybrook University and Stonebridge Associated Colleges, among numerous others. "Listening and learning from other people is really important to me," Dr. Andreae says to Star, adding, "education is not just an intellectual exercise; it is most effective when the head meets the heart."

An applauded contributor to such respected medical establishments as the Toronto General Hospital, the Weizmann Institute of Science, the Psychology Foundation of Canada, the University Health Network and the Ontario Association of Social Workers, Dr. Andreae has strengthened his professional reputation with a gallery of awards. Accepting honorary degrees from York University and Assumption University, he was bestowed with a Lifetime Achievement Award from the National Eating Disorder Information Centre, the Lyall Hallman Social Work Award, the Champion of Change Award from Princess Yasmin Khan and the Ontario Medal of Citizenship from the lieutenant governor of Ontario, to name a few of his prestigious accolades. Dr. Andreae was additionally celebrated as the Canadian Social Worker of the Year, the Ontario Social Worker of the Year, the Top Educator of Brain Education in Canada and the 2001 Alumnus of the Year by Wilfrid Laurier University.

Devoted to invigorating the next generation of medical professionals, Dr. Andreae currently provides his tremendous wealth of knowledge in the classrooms at the University of Guelph-Humber and the University of Waterloo. Remarkably proud of his work as an educator, he shares that "you're not going to reach every student, but when I teach, I like to create an atmosphere in the classroom that is safe and encourages them to share their ideas." Honored by his association with Marquis Who's Who, Dr. Andreae's extraordinary tenacity has been deservingly endorsed with The Star Treatment! 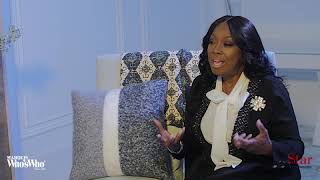