TYRONE, GA, May 13, 2020 /24-7PressRelease/ -- Grant Delbert Venerable II, PhD, has participated in The Star Treatment, a prestigious video series hosted by renowned lawyer and television personality, Star Jones. This premier video series is extremely limited — Marquis Who's Who qualifies 500 listees on an annual basis for this elite service. Backed by a storied career in media that spans more than two decades, Star works closely with Marquis listees to assist with networking goals and commemorative efforts that can be shared with a worldwide audience.

Renowned as an expert on "the unity of knowledge," Grant Delbert Venerable II, PhD, has made a lasting impact on his students, colleagues and industry through his stellar work over the course of nearly 50 years. He was most recently active as an adjunct chemistry instructor for Georgia Military College from 2017 to 2019 prior to entering a well-deserved retirement. Notably, he attributes his success to his creative imagination, his long-range vision, his determination and his persistence, which greatly informed his unique and effective teaching style. "[My greatest professional achievement is] teaching chemistry so that people with no more than 2 and ½ brain cells could learn it," Dr. Venerable tells Star Jones, elaborating, "[I was] able to distill the meaning of the chemistry that I was teaching."

Dr. Venerable embarked upon his professional path at an early age, stating to Star, "As a child, I thought that I wanted to be a mechanical engineer and follow in my father's footsteps. I had an insatiable interest in science, including how the body works, astronomy and the solar system… It was in junior high school that the seriousness began to take over. Russians were putting up their satellites and our national leaders were calling upon kids to consider a career in science. So I began to set my sights on science and mathematics in high school."

After initially pursuing an education at the James A. Foshay Junior High School and the Manual Arts Senior High School, Dr. Venerable obtained a Bachelor of Science in chemistry at the University of California Los Angeles in 1965. He concluded his formal studies in physical chemistry at the University of Chicago, earning a Master of Science in 1967 and a Doctor of Philosophy in 1970. He subsequently completed a postdoctoral fellowship with the United States Atomic Energy Commission in the Laboratory of Nuclear Medicine at the University of California Los Angeles in 1971. Dr. Venerable began his career in the field of education as a chemistry and biology instructor for the Duarte Unified School District from 1971 to 1972.

Following his inaugural academic appointment, Dr. Venerable flourished as an associate professor of chemistry at the California Polytechnic State University from 1972 to 1978. He cites this tenure among the highlights of his career as he discovered that he could secure grants to develop innovative approaches to teaching. He later thrived as a chemistry lecturer at the University of California Santa Cruz, the executive vice president of Omnitrom Associates and a lecturer in the College of Ethnic Studies at San Francisco State University. Finding success as the president and the chief executive officer for Ventek Software between 1992 and 1999, Dr. Venerable further excelled in a multitude of positions at Chicago State University, Morris Brown College, the Atlanta University Center Consortium and Lincoln University.

Dr. Venerable has additionally provided his wealth of knowledge in a limited capacity at California Polytechnic State University, California State University, Los Angeles, the California Institute of Integral Studies and Laney College over the years. Beyond his primary responsibilities, he was highlighted as a keynote speaker for the National Conference on Arts Education at the John F. Kennedy Center for the Performing Arts in 1985 and 1987. He additionally served as the secretary for the state board for the California Alliance for Arts Education from 1985 to 1991. An accomplished author, Dr. Venerable has also shared his research through several written works, including "The Discovery of Calculus of Transformations in Chemistry" in 1974, "The Paradox of the Silicon Savior" in 1988, "Managing in a Five Dimension Economy" in 1999 and "Human Footsteps in Art, Science, and the Chaotic Unknown Oracles and Kinfolk" in 2019.

However, Dr. Venerable's most substantial achievement has been changing the perspective of many generations of students, imparting to Star, "Chemistry is the study of everything and anything… There's a logical relationship if you have substance. That's when you have evidence, and all substance is a pure activity. It's not the stuff; it's what the stuff is doing as an activity. You are stuff that's alive and doing something. So once you're aware of your selfness as activity and producing evidence of your selfness, you're conquering life and on your way to success."

Dr. Venerable has turned much of his attention following his retirement inward, stating to Star, "I've seen almost everything at this stage of the game; of course, I really haven't but it feels like that. I can connect the dots very accurately and deeply to see what connected with that that lead to this… I now see some self-control over some things that were unanticipated."

Dr. Venerable has harbored a mounting interest in his own familial heritage, sharing with Star, "My father was the first human being of African descent to graduate from CalTech in Pasadena in 1932… My whole family knew I was interested in the family genealogy… My father's father was born as a slave in 1823. Abraham Lincoln was a co-descendent from the same ancestor as these men; his mother was a Venerable… I was able to see how people could talk from radically different positions and be able to hear one another and realize there was more of a connection than difference."

As a testament to his superb work as an chemistry educator, a systems scientist and an advocate for African American studies, Dr. Venerable was presented with an Outstanding Teaching Award for Chemistry from California Polytechnic State University in 1977, a Molecular Art Appreciation Award from Alpha Chi Sigma in 1984 and an Outstanding Achievement Award from the California Alliance for Arts Education in 1990. He has also accepted the "Step To" College Distinguished Teaching Award from San Francisco State University in 1991 and the National Educational Leadership Award from the JGT Foundation of San Francisco in 1996. Dr. Venerable was also greatly involved in the development and application of the Ven Matrix of an Optimum System for teaching, research and organization management.

A distinguished Marquis Who's Who listee, Dr. Venerable remains markedly proud of his association with Marquis, explaining to Star, "I realized Marquis was not just elevating the value for ethnic diversity but diversity in its true sense. Once I glimpsed that in our early conversations, I realized that what's everyone here is about. That's what has thoroughly blown my mind and I've seen where Marquis is headed."

Looking toward the future, Dr. Venerable hopes to cement his legacy as well as the legacy of his family, emphasizing "I wanted to set up an endowment named in honor of him and my mother, Grant and Thelma Scott Venerable, so that the institute can formalize of how social conditioning can actually effect the development of science and engineering." For his unwavering dedication toward the advancement of his profession, his intelligence and the world around him, Dr. Venerable is most deserving of the Star Treatment! 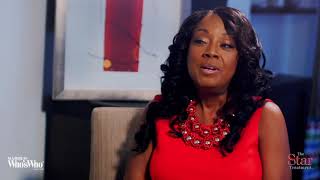