Dr. Katz has further flourished as an athlete, author, philanthropist and public speaker

NEW YORK CITY, May 13, 2020 /24-7PressRelease/ -- Dr. Jane Katz has participated in The Star Treatment, a prestigious video series hosted by renowned lawyer and television personality, Star Jones. This premier video series is extremely limited — Marquis Who's Who qualifies 500 listees on an annual basis for this elite service. Backed by a storied career in media that spvans more than two decades, Star works closely with Marquis listees to assist with networking goals and commemorative efforts that can be shared with a worldwide audience.

Having provided a vital resource to her community for many decades, Dr. Jane Katz recently concluded a sterling 30-year tenure as the professor of health and physical education at the John Jay College of Criminal Justice, a senior college within the City University of New York system. During this time, she proudly provided her wealth of knowledge on swimming and conditioning to many generations of police officers and firefighters within New York City, helping to ensure their safety in the field as well as the safety of others in emergency situations. A lifelong resident of New York, Dr. Katz has been incredibly dedicated to bettering her diverse community, telling Star Jones, "It's where I grew up and where I taught. It's like a United Nations, with people that are older, younger and all of the colors of the rainbow."

An esteemed athlete in her own right, Dr. Katz's professional journey began in her youth, swimming through her formative years at regional pools and beach before competing in her first race at the age of 6. She attributes her success to her parents, Dorothea and Leon, who transformed swimming and physical education into a family affair. "My father, an engineer who was taught how to swim after nearly drowning, decided to hold free swimming classes for nearly 65 years at the local Y," Dr. Katz imparts, further stating, "I was a part of the team and a part of the teaching team as well. I continued to do so throughout high school, college and beyond."

Certified by the American National Red Cross in water safety instruction, Dr. Katz decided to remain local in her academic pursuits, obtaining a Bachelor of Science in health and physical education at the City College of New York in 1963. She decided to parlay her already impressive experience pragmatically through a position as a teacher of health and physical education at Seward Park High School from 1963 to 1964. For the following 25 years, she found much personal and professional success as a professor of physical education at Bronx Community College with the City University of New York. During this time, Dr. Katz significantly furthered her studies while expanding upon her skill set, earning a Master of Arts in organization and administration from New York University as well as a Master of Education in therapeutic recreation for aging and a Doctor of Education in gerontology at Teacher's College with Columbia University.

Personally inspired by Johnny Weissmuller and Buster Crabbe, Dr. Katz is incredibly proud of her association with the Maccabiah Games in Israel, in which she has encountered many good, longstanding friends. "I'm in the 75-80 age group now," she tells Star, explaining, "But it doesn't matter. The water is still there; it's the great equalizer, it's democratic and it works for everybody." Furthermore, Dr. Katz heralds her 1981 book, "Swimming for Total Fitness: A Complete Program for Swimming Stronger, Faster and Better," as a point of inspiration, the culmination of her teenage aspirations and the highlight of her career.

An in-demand speaker and goodwill ambassador for a number of organizations in relation to her areas of expertise, Dr. Katz has accrued countless accolades for her exceptional efforts as an athlete and educator. Having competed alongside, and maintained her affiliation with, the U.S. Master's All-American Swim Team for more than 45 years, she has held a number of professional and competitive swimming records from around the world. Likewise, Dr. Katz has been honored among the Legends of the Maccabiah by the New York Athletic Club in addition to various recognitions and commendations from the International Swimming Hall of Fame, John Jay College of Criminal Justice, the National Jewish Sports Hall of Fame and Museum, the United States Junior Chamber and the Children's Better Health Institute, among others.

In terms of her philanthropic undertakings, Dr. Katz has been responsible for the development of a number of groundbreaking programs, including the Kids Aquatic Re-Entry (K.A.R.E) for At-Risk Youth program in 2008 and the W.E.T.S. 4 VETS® holistic treatment program for veterans looking to acclimate back into civilian life. Having devoted the majority of her life to helping future generations learn how to swim as a skill for survival and recreation, she has been also highlighted on many occasions as a Marquis Who's Who listee, telling Star, "It is fantastic to be a part of a club of people who are interested and interesting… It's also very important to share what you do and give it willingly because if you don't tell anyone about it, then no one knows about it." For her tremendous contributions to physical education, her community and those less fortunate, Dr. Katz is more than deserving of the Star Treatment! 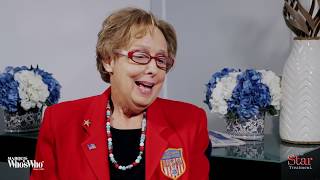