As the CEO of a home health care agency, Ms. Washington is no stranger to the challenges of business

VICKSBURG, MS, March 31, 2021 /24-7PressRelease/ -- Natasha Nicole Washington has participated in The Star Treatment, a prestigious video series hosted by renowned lawyer and television personality, Star Jones. This premier video series is extremely limited — Marquis Who's Who qualifies 500 listees on an annual basis for this elite service. Backed by a storied career in media that spans more than two decades, Star works closely with Marquis listees to assist with networking goals and commemorative efforts that can be shared with a worldwide audience.

As the CEO of Washington Home Health Agency, LLC, Ms. Washington gives God glory for putting her in her position. She started out taking care of her grandmother, who raised her. Growing up, she always taught her that her mother was a nurse, and her grandmother was a nurse, so caring for people ran in her blood. Taking that to heart, she decided to become a nurse, though she was never able to realize that dream for herself. After transitioning from a career in the gaming industry, she had an opportunity to work with others for hospice care. The opportunity changed her life and reaffirmed her decision to go into health care. She prayed on it, and decided to open her own business. Star explained her own experience with end of life care, describing her grandmother's experience with home health aides near the end of her life.

When asked about her challenges along the way, Ms. Washington feels that her family presented her with a few. While the experience left her drained, she knew that she had to press forward, turning once again to her faith for strength. With the help of her church community, she rose up once again and was ready to face the world as a new woman.

The mission of the Washington Home Health Agency is to "be blessed to be a blessing," and to be a blessing to each and every thing that they touch. Her staff goes the extra mile for patients, regularly visiting with them for special occasions and birthdays, renting limousines to take them to appointments, anything that makes them feel like royalty. Though COVID-19 has been a setback, it has not stopped Washington Home Health Agency from bringing joy to its clients, albeit a little more cautiously. "I've only had one worker who was affected by COVID," she said, but thankfully she recovered quickly and is back on the job. Ms. Washington receives calls from patients daily, letting her know that she is doing a good job.

The theme of Ms. Washington's career is that she loves working with people. The only thing she wishes she could have done differently with her work is that she wished that the early days would have provided her with more time to spend with her family. Turning to the future, Ms. Washington has been thinking about opening a brick and mortar facility. Her dream is to operate out of numerous offices internationally, being a blessing all over the world. Ms. Washington stated her company's credo: "A generous person will prosper. Whoever refreshes others will be refreshed." With that in mind, it should come as no surprise that Ms. Washington is deserving of the Star Treatment. 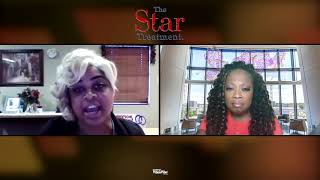