PALM CITY, FL, March 31, 2021 /24-7PressRelease/ -- David John de Harter, MD has participated in The Star Treatment, a prestigious video series hosted by renowned lawyer and television personality, Star Jones. This premier video series is extremely limited — Marquis Who's Who qualifies 500 listees on an annual basis for this elite service. Backed by a storied career in media that spans more than two decades, Star works closely with Marquis listees to assist with networking goals and commemorative efforts that can be shared with a worldwide audience.

Dr. de Harter, a retired radiation oncologist, started his career in medicine making rounds with a surgeon, who later left the University of Wisconsin and relocated to become the second-in-command of the MD Anderson Cancer Center in Houston. Dr. de Harter admired many characteristics of this surgeon, and found that he seemed to have a keen understanding of where the field was going. "Oncology, of course is the study of people with cancer," said Dr. de Harter. A large field, it also tends to attract top performers of medical school. During his time in the Navy, Dr. de Harter took some medical courses, and after borrowing an oncology textbook from a fellow classmate, he perceived that in oncology, rather than competing with other doctors, "you're playing against yourself." This would keep him on his toes, he reasoned, and he set out to join that specialty.

Part of the treatment regimen offered by Dr. de Harter was the implantation of radioactive "seeds," keeping these in place so that their toxic radiation would affect as many cancerous cells as possible, while affecting as few healthy cells as could be managed. To aid in this effort, Dr. de Harter was proud to have developed the "seeds in suture" technique, which involved placing these seeds inside a biodegradable suture, which would keep the seeds in place so that they would be able to do their work. Another of Dr. de Harter's inventions was the Harter Holder, which was designed to protect patients of testicular cancer from receiving radiation doses in unaffected testicles.

As a gifted inventor, it should come as no surprise that this passion also extended into other creative endeavors. After the tragic loss of his wife, he found solace in art. Dr. de Harter and his late wife had collected art, and they shared a deep love of abstract impressionists. The two would collect art based on the so-called Venn diagram method, he explained, holding up two circles with his fingers. "Here's what I liked," he said, presenting his left hand, "and here's what she liked," he said, holding up the right, "and right in the middle, that's what we collected."

"I work in clay," explained Dr. de Harter, who has a couple of dozen works to his name, many of which he showed Star Jones. He cited inspiration from Chadwick Boseman, or "Black Panther," who motivated him to explore African themes in his sculptures, such as "Wakanda Woman." When asked about the one thing he would leave the audience with, Dr. de Harter feels that people have lost their sense of humor. "People are taking all of this way too seriously, and getting angry, there's no point in doing that. We're all brothers and sisters." With those wise words of community, and his diverse talents, there can be no doubt that Dr. de Harter is worthy of the Star Treatment. 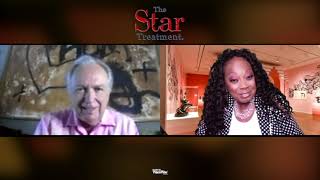