Joan A. Muir, Ph.D. Gets the Star Treatment!

Dr. Muir sits down with Star Jones to talk about her passion

WESTON, FL, March 31, 2021 /24-7PressRelease/ -- Joan A. Muir, Ph.D. has participated in The Star Treatment, a prestigious video series hosted by renowned lawyer and television personality, Star Jones. This premier video series is extremely limited — Marquis Who's Who qualifies 500 listees on an annual basis for this elite service. Backed by a storied career in media that spans more than two decades, Star works closely with Marquis listees to assist with networking goals and commemorative efforts that can be shared with a worldwide audience.

A clinical psychologist, Dr. Muir shared her story with Star Jones, including the interesting tale of how she became involved in her profession. When she was a child in Jamaica, she attended a Christmas Pixie exchange for $2. As her gift, she received a book called "Dibs in Search of Self," about a young boy who received child therapy from a famous English play therapist. Dr. Muir marveled that it was such a wonderful thing to do, to be able to talk and play and help people. As a result of this experience, she resolved to become a psychologist. Star shared her own career history, having decided to become a lawyer based on a television character. Both women of color agreed that there were not many famous Black female role models in their fields, but they were "put there by God," as Star put it.

As far as her own work as a clinical psychologist, Dr. Muir explained that it is the most commonly known field of psychology, but she also pointed out that "not all psychologists do therapy." Clinical psychologists, however, do, and they are trained to assess, diagnose and treat serious disorders, and they also perform research. It is this lesser-known part of the job that makes it a true science, requiring a PhD to deal with the advanced subject matter. Dr. Muir's specialties as a psychologist are family therapy and couples therapy. There is a serious need for family therapists, and Dr. Muir is proud to help fulfill that need. Dr. Muir feels that the most rewarding part of her career is helping fathers open up to therapy. It is often thought that opening oneself up to therapy is somehow anti-masculine, however Dr. Muir frowns on this notion, pointing out that families include fathers as well, regardless of whether they are married or living in the home with the rest of the family.

Dr. Muir's strategy for engaging with fathers is to empower them by consulting with them as the expert of their children. This messaging has proven successful with patients, as it gives the father a sense of importance to the process that may otherwise be lost. "Boys need their dads as role models, and girls, too," Dr. Muir pointed out. It was her own father who gave her the strength to push on as she was frustrated with her early career as a research psychologist. To successfully treat a family, it is critical to make sure every family member receives contributions from each other member. Sometimes this involves recognizing that the psychologist can serve as a barrier without realizing it, unconsciously minimizing one member of the family by their words and actions.

When Star asked about the proudest moment of her career, Dr. Muir cited "the wind beneath her wings," Dr. Walter Philips at Yale University. When Dr. Muir was doing her internship, Dr. Philips mentored her. Everyone around her looked at Dr. Philips as "super-bright," and she had been warned not to be intimidated by this and to seek his feedback, since he was so supportive. One day, she came up for an evaluation. Dr. Muir expected to hear both good and bad news, but Dr. Philips simply said, "I have been doing this for 19 years, and I want you to know you the best intern I've had the privilege of supervising."

Dr. Muir gives back to the community by being a member of the Association of Black Psychologists, which is a premiere organization, formed in 1968 as part of the civil rights movement as a counter part to the American Psychological Association, which at that time had embraced theories that Blacks had lower IQs as scientific fact. The organization created an advocacy arm that influenced the American Psychological Association into becoming the more tolerant and diverse organization that it is today. Dr. Muir is the past president of the South Florida Chapter of the Association of Black Psychologists, as well as the past national secretary. Dr. Muir celebrates the contributions of the founders of the South Florida chapter by starting a scholarship to give to a promising Black student. Through donations alone, and in the middle of the COVID-19 pandemic, they raised close to $3,000.

It should come as no surprise that Dr. Muir, a family-focused clinical psychologist, was motivated by her family to enter her field, however her reasoning for doing so may be surprising. She was raised in an exceptionally strict family, and her passion for learning about this family dynamic was one of the factors that made her want to explore family therapy. As she put it, "my family is my greatest support and my greatest lesson."

Dr. Muir wants viewers to be aware of their strengths and vulnerabilities. "When you're feeling really vulnerable… go see a mental health professional." Star agreed, noting that removing stress can add years to your life. With a heart full of compassion and a head full of hard-earned wisdom, Dr. Muir surely deserves the Star Treatment. 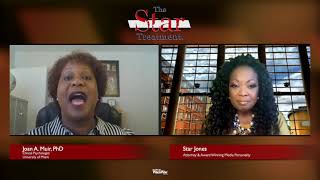