Dr. Huang, a molecular biology educator, sits with Star Jones to discuss her history in the field

BALTIMORE, MD, March 31, 2021 /24-7PressRelease/ -- Ru Chih Chow Huang has participated in The Star Treatment, a prestigious video series hosted by renowned lawyer and television personality, Star Jones. This premier video series is extremely limited — Marquis Who's Who qualifies 500 listees on an annual basis for this elite service. Backed by a storied career in media that spans more than two decades, Star works closely with Marquis listees to assist with networking goals and commemorative efforts that can be shared with a worldwide audience.

Dr. Huang, whose life's work is dedicated to discovering the cause of cancer in order to eradicate it, first became involved in education to follow in her family's footsteps. "My father was the president of a college in Taiwan," Dr. Huang explained, "so my family had a lot of influence on my decision." Her early work addressing many critical discoveries on the function of chromosomal proteins, messenger RNA and RNA synthesizing enzyme, the RNA polymerase represent the major aspect of RCH's earlier contributions to the field of Molecular Biology. These publications have since been chosen as part of the contemporary classics in life sciences in the 20th century (ISI Press). Dr. Huang's more recent research focuses on the understanding of viral replication and oncogenic development in humans.

When it comes to preventing cancer, Dr. Huang was philosophical in her approach. "Why is cancer?" She wondered. The key problem is how to find a way to eradicate cancerous cells, while leaving healthy cells untouched. She emphasizes the importance of impacting the cancer's metabolism, which is key to eliminating the disease. "When you're a scientist," Dr. Huang says, your results speak more than any awards or accolades could.

At 89 years young, Dr. Huang still feels that she has many years left to contribute to the fight against cancer. She hopes to help the field achieve whatever progress is possible, both in terms of cancer and the coronavirus. "There's a lot in common between the two," said Dr. Huang, in that they both spread through replication within the body to produce a negative effect. She suggests using the same treatment, M4N as a possible source of relief. She theorizes that finding an effective M4N combination could help those currently infected with COVID-19.

Switching to a slide-show presentation, Dr. Huang showed the results from a single group study into the effect of intralesional tetra-o-methyl nordihydroguaiaretic acid (M4N) in oral squamous cell carcinomas. The results were promising – per the study's abstract, "M4N has demonstrated significant inhibition of cellular production of Cdc2 and survivin, a potent pro-apoptotic response." A "pro-apoptotic" response refers to apoptosis, or the natural death cycle of cells, which cancer interrupts. As a result of the treatment, tumors were found to become necrotic and shrink, leading to increased survival rates.

For her second slide, Dr. Huang explained the results of another trial, also involving the M4N treatment, to evaluate the survival rates of mice that had been orthotropically implanted with various tumors. In most cases, M4N treatment was shown to outperform the control group and lead to better survival rates, especially when used in conjunction with sorafenib, a protein kinase inhibitor.

When asked about the secret to a long life, Dr. Huang answered that her faith gives her strength, and she is blessed to be able to go to work each day in a job that she loves. "I think, basically, one should have an attitude not to do too much thinking about becoming rich and famous. Just be happy for doing the work itself, and have a nice family." With values that speak to the heart of America's character, and work that is changing the world we live in, there can be no doubt that Dr. Huang is deserving of the Star Treatment. 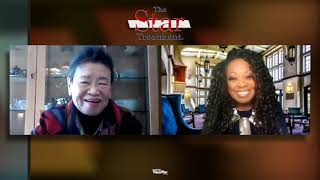