ATLANTA, GA, March 31, 2021 /24-7PressRelease/ -- Rev. Dr. Thomas R. Flynn has participated in The Star Treatment, a prestigious video series hosted by renowned lawyer and television personality, Star Jones. This premier video series is extremely limited — Marquis Who's Who qualifies 500 listees on an annual basis for this elite service. Backed by a storied career in media that spans more than two decades, Star works closely with Marquis listees to assist with networking goals and commemorative efforts that can be shared with a worldwide audience.

Rev. Dr. Flynn, known by many as Fr. Tom or simply Tom, entered the priesthood through a combination of inspirations; his family, his church, and his community all granted him the strength he needed to realize his true vocation. When Tom decided to become a priest, his father was relieved saying to him, "[He] was much happier when [he] didn't have a lot of money," Rev. Dr. Flynn explained. Tom attended Carroll College in Helena, Montana, which took his education very seriously, much to his benefit. After attending North American College in Rome for seminary, completing his studies in Latin, he then studied at Columbia University for his postgraduate education.

Loving the priesthood, Fr. Flynn is also passionate about philosophy, and he makes sure that his students have experience with some of history's greatest thinkers, such as Kierkegaard, Sartre, and Foucault. He has written books in philosophy, as well. "If you're gonna survive these days, in a research role in a university, you jolly well better produce books." His proudest work was published by Cambridge University Press, and his other works have been picked up by several university presses and published in different languages. When asked about the highlight of his career, Fr. Flynn recalls meeting Pope John XXIII in Rome when he was a student there. "He said to me, you're a pretty lucky young man to be studying in Rome," and that always had an impression on him. Another highlight was meeting Michele Foucault in Paris, while he was working on writing a book on Foucault. He wrote to Foucault and requested an interview. He later received an invite to meet with him and talk.

Some of the most important philosophy that Fr. Flynn teaches concerns ethics and history. Tom believes that his sense of morality, above all else, has contributed to a meaningful life. This point sparked a conversation between Star and Rev. Dr. Flynn, who discussed the difference between "humility" and "humiliation," and how the two can become confused. The purpose of humility, as Fr. Flynn said, is to have a sense of your own value, and the value of other people.

When asked about what advice he would leave to the viewer of his video feature, Fr. Flynn reiterated the importance of humility, which would contribute to a graceful and peaceful future. Always in good humor, Fr. Flynn ended by saying, "I'm quite proud of my humility. Thank you, very much!" 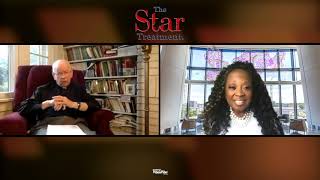