Mr. Kubler flourished at his eponymously named practice for 15 years and wrote more than 100 patents

MIRAMAR, FL, March 31, 2021 /24-7PressRelease/ -- Frank Kubler has been included in Marquis Who's Who. As in all Marquis Who's Who biographical volumes, individuals profiled are selected on the basis of current reference value. Factors such as position, noteworthy accomplishments, visibility, and prominence in a field are all taken into account during the selection process.

Born and raised in Pensacola, Florida, Frank L. Kubler, Esq., who has dedicated more than 30 years to the legal field, gravitated toward his professional path through an early interest in Thomas Edison and the history of technology. When he was young, he was fascinated by the work of the famous inventor, consuming several books about Edison and learning about his technological achievements. In addition, through his readings, he learned of Edison's several patent disputes and, as a result, became interested in patents—which would later be among his many areas of expertise. He also enjoyed seeing how technology evolved since the late 1800s and developing a grasp on where it was heading. Concurrently, his father, Frank, worked as an electrical engineer and he decided to follow in his footsteps based on his similar interests; he knew he had to study other areas in order to go to law school and he thought he could ultimately combine engineering with law.

Mr. Kubler attained an Associate of Arts from Miami-Dade Junior College in 1978 before attending the University of Miami, where he earned a Bachelor of Science in Mechanical Engineering, a Bachelor of Arts in History, and a Doctor of Jurisprudence—all between 1981 and 1986. Equipped with degrees, he was admitted to practice law by the state of Florida, the U.S. Circuit Court for the 11th Circuit, the U.S. Circuit Court for the Federal Court, and the U.S. Patent Office, and served as an associate at Dominik, Stein, Saccocio, Reese, Colitz & Van der Wall, a Miami Lakes-based practice from 1986 to 1990. Following this appointment, he excelled as the president of his own practice, the Law Office of Frank L. Kubler, from 1990 to 2005. He also consulted at Oltman, Flynn & Kubler throughout the early 1990s and has been a partner at this firm since 1996.

Over the course of his career, Mr. Kubler has written more than 100 patents, and has contributed his vast wealth of legal knowledge—which encompasses such areas as mechanical electrical, patents, and pharmaceuticals—as a member of such organizations as the Intellectual Property Law Association of Florida, of which he served as vice president and president. In addition, while in at the University of Miami, he contributed to the Inter-American Law Review, which publishes articles, casenotes, current reports and special features by distinguished figures and law students. He has also been affiliated with Mensa International, Rotary International, and Tau Beta Pi.

With a lifelong passion for technology and education, Mr. Kubler has vowed to never stop learning—no matter how accomplished his career has been thus far. On this note, to those who may aspire to follow in his professional footsteps, he urged to never stop learning, to develop a broad background in undergraduate studies before pursuing law school, and to study a variety of technologies. He would like to be remembered by his peers and clients as someone who was consistently knowledgeable, reliable, and comfortable in his work. 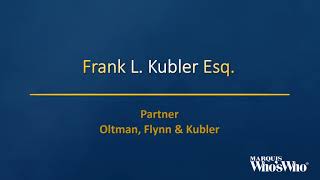