Backed by five decades of experience, Mr. Berke has devoted his career to civil justice

CHATTANOOGA, TN, March 31, 2021 /24-7PressRelease/ -- Ronnie Berke has been included in Marquis Who's Who. As in all Marquis Who's Who biographical volumes, individuals profiled are selected on the basis of current reference value. Factors such as position, noteworthy accomplishments, visibility, and prominence in a field are all taken into account during the selection process.

Driven by great compassion for others and a desire to see wrongs righted, Ronnie Berke has devoted more than 50 years to civil justice, providing leading legal services in personal injury, commercial, products liability, and medical malpractice law across the Mid-South of the United States.

Mr. Berke's gravitation toward his professional path came naturally. His father was an upstanding and admired attorney, whose stories about helping people in cases greatly inspired him growing up. His older brother, too, followed in their father's footsteps. Through hard work and strong guidance and training by his father and brother, Mr. Berke directed his goals toward the courtroom. From an early age, he put into action his father's words of wisdom: "You never give up and you outwork everyone else…when you're prepared, you get lucky."

Upon graduating, Mr. Berke joined the family practice of Berke Berke & Berke, where he has served as a partner since 1971. The secret to the firm's longevity and reliability in the eyes of many, Mr. Burke believes, has been the mission of its members to do what is best for their clients and not what is always easiest for the practice. He has tried countless state in both the state and federal courts, as well as the state and federal appellate courts. As an instrument-rated pilot, his legal expertise also extends to aviation matters in addition to motor vehicle accidents. Beyond his work as a practicing attorney, he is an active member of the prestigious Million Dollar Advocates Forum and Multi-Million Dollar Advocates Forum. From 2000 to 2015, he was active on the Board of Governors for the American Association for Justice, the organization that "delivers exceptional education, unparalleled advocacy, and a dedicated community of trial lawyers fighting for justice."

As a testament to his reputation and prowess, Mr. Burke has been called on frequently as a guest lecturer for events held by such organizations as the Southern Trial Lawyers Association and the Tennessee Association for Justice. He has contributed his extensive knowledge of the field to written works as well, co-authoring "Trail Handbook" and the Association of Trial Lawyers of America's "Litigation Tort Cases." Mr. Burke was notably presented with such accolades as the Tennessee Supreme Court Service Award and the Bancroft-Whitney Publishing Company American Jurisprudence Award.

Upon reflection of his accomplished life and career so far, Mr. Burke attributes much of his success to true empathy for people and their problems. He has found it incredibly rewarding to be able to help others solve their issues and make their lives a little easier. When his clients feel as though justice has been served, he takes great pride in playing a part in restoring faith in the civil justice system. Mr. Burke urged the importance that law should not be pursued for the money, but to represent people for the right reasons. 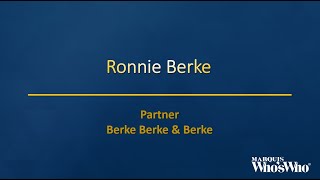