MONTPELIER, VA, March 31, 2021 /24-7PressRelease/ -- Richard Sells has been included in Marquis Who's Who. As in all Marquis Who's Who biographical volumes, individuals profiled are selected on the basis of current reference value. Factors such as position, noteworthy accomplishments, visibility, and prominence in a field are all taken into account during the selection process.

Driven by a goal to help people become more self-sufficient and achieve their dreams, Richard A. Sells has dedicated more than 25 years to professional career training in the fields of massage, aesthetics, holistic health, and spas as founder and Chief Executive Officer of the American Spirit Institute.

Mr. Sells, who has earned a Bachelor of Science in Philosophy, a Master's of Public Administration, and a Master of Divinity, has always had a passion for education. He developed a love for helping young people develop careers of their own as a teacher at the college level. Prior to starting the American Spirit Institute, he served as Chief Executive Officer and founder of New Heritage in 1973 and president and founder of Life Crimes in 1985, among several leadership positions across a dozen corporations, such as LifePrime, Inc., and One World Village. In addition, he has been active as a board member at The Bradley Center, an organization devoted to healing children and teens who have experienced trauma, mental illness, and behavioral challenges.

Over the course of his career, Mr. Sells has been motivated by several integral people in his life, including the late Senator John Hines from Pennsylvania, who owned the Hine's Company and was incredibly supportive during his first major professional venture. The senator greatly inspired him to pursue his passion and the work he was doing in the early stage of his career. Another huge figure in his journey was former President Jimmy Carter, for whom Mr. Sells was a campaign coordinator.

At the American Spirit Institute, which opened in Williamsburg, Virginia, in 1992, Mr. Sells has strived to help students develop professionally in their chosen fields of study through the institute's Schools of Massage Therapy, Esthetics, Nail Technology, and Waxing Technology. Through its many holistic-based programs, the American Spirit Institute offers innovative classes to help its students learn new things and grow more confident—and competent—when it comes to entering the marketplace.

Mr. Sells has contributed his expertise—in developing new and creative ventures that would be helpful to people—in several written works, having authored a book and numerous magazine articles. In addition to his primary roles, he has been affiliated with such organizations as the Children's Home of Pittsburgh and the Brownsville Historical Society. As a testament to his success, he has been honored with an Outstanding Young Men of America Award and featured in several Who's Who publications.

Looking toward the future, on top of maintaining his current roles, Mr. Sells plans on developing a program on his farm, which he has recently purchased, that would focus on preservation and sustainability, and teach life skills. He has always encouraged others to follow their passion, do what makes them happy, and always pay it forward by helping others. Energetic, driven, and creative, Mr. Sells hopes to be remembered by his peers and students as someone who was sensitive to people's needs, always got along with everyone, and worked hard in whatever he was doing.

With his wife of more than 15 years, Carolyn, Mr. Sells is the proud parent of seven children. 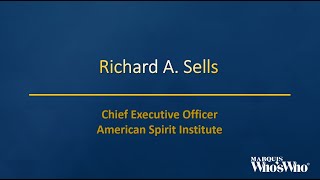