Dr. Halloran entered his students into a statewide mathematics fair to improve their skills

EAST LONGMEADOW, MA, March 31, 2021 /24-7PressRelease/ -- Philip Halloran has been included in Marquis Who's Who. As in all Marquis Who's Who biographical volumes, individuals profiled are selected on the basis of current reference value. Factors such as position, noteworthy accomplishments, visibility, and prominence in a field are all taken into account during the selection process.

Guided by a love for his students, leading academic discourse, and inspiring the next generation to succeed, Philip P. Halloran, PhD, has devoted the last six decades to education—as a teacher, writer, and advocate. Since 1991, he has held the role of Professor of Mathematical Sciences at Central Connecticut State University, where he also serves as chair of the Math Department.

In 1962, while studying physics at Worcester State College, Dr. Halloran took his first step onto his professional path by student teaching. Despite enlisting in the Marine Corps and initially wanting to pursue a career in the military, he had an instant "ah-ha" moment in the classroom, and recalled that the experience was "wonderful and beautiful." He fell in love with teaching that first day and never changed his mind. Upon graduating with a Bachelor of Science in Physics the following year, he began teaching mathematics and science at Springfield Public Schools in Massachusetts—but dropped science as he told the principal that it was difficult to teach the subject without proper equipment or a lab. He focused on math and held the position until 1970.

When he started teaching, Dr. Halloran took it upon himself to enter his students into a statewide mathematics fair titled "Having a math fair," which was held at Salem State College. One of his seventh graders, with whom he remains in close contact, focused her project on the development of 7.7 line geometry, which was very abstract and impressive; she ended up wowing the judges and winning First Prize. With Dr. Halloran as her inspiration, she went on to become a math teacher.

From 1970 to 1991, Dr. Halloran advanced from teaching to serving as the Director of Mathematics Education at Springfield Public Schools. In the midst of this role, he continued his education by obtaining a Master of Arts in Liberal Studies in Mathematics from Wesleyan University in 1970 and a Doctor of Philosophy in Mathematics Education from the University of Connecticut. He also joined Merrill Publishing Company, where he became the third member of an author trio behind the renowned, best-selling "Merrill Mathematics K-8" textbook series between 1982 and 1992—which he regards as the highlight of his accomplished career. He and his colleagues at Merrill had more mathematical influence on young people than anyone else at the time, as thousands of students were learning through their program, guided by their words and techniques. In 1991, he advanced from public school to college and began excelling at Central Connecticut State University, where he remains to this day.

In addition to his primary endeavors, Dr. Halloran has also been active as an adjunct professor at the University of Connecticut for five years and as a member of the Bar Smith Scholarship Committee, which gives away $20 million to students each year. He has also maintained affiliation with a number of academic organizations over the course of his career, such as the National Science Foundation, National Council of Teachers in Mathematics, Atomic, also known as Associated Teachers of Mathematics in Connecticut, and Curriculum Associates.

Continually motivated by his students' success, Dr. Halloran has found it immensely rewarding to hear from former students who express gratitude for his teaching and leadership in their formative years. He advises those with aspirations of becoming educators to "love what you do, be enthusiastic, stay excited, care about the students, and do something to help you love it—if not try something else."

Looking toward the future, he hopes to still be teaching, and guiding some students toward becoming the best math educators in the state of Connecticut. He hopes to be remembered by his students as the best teacher they ever had. 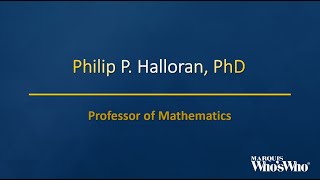