James Stewart Honored for Excellence as Head of The Stewart Group

ST. AUGUSTINE, FL, March 31, 2021 /24-7PressRelease/ -- James Stewart has been included in Marquis Who's Who. As in all Marquis Who's Who biographical volumes, individuals profiled are selected on the basis of current reference value. Factors such as position, noteworthy accomplishments, visibility, and prominence in a field are all taken into account during the selection process.

James H. Stewart, who has served as the president and managing director of The Stewart Group since 1988, has built an accomplished career in his field of health care and pharmaceuticals as a leader with a lifelong desire to help others.

A native of Boston, Mr. Stewart knew from an early age that he wanted to pursue a career in health care, seeing it as a great opportunity to better people's lives. He became motivated to become a pharmacist, specifically, while in high school by Joseph Moses Port, a renowned pharmacist who served as a significant influence in his life. With personal dedication and the support of his family, he attended the Massachusetts College of Pharmacy and Health Sciences, where he earned a Bachelor of Science in Pharmacy in 1964, after which he became a registered pharmacist.

Mr. Stewart began his career as a practicing pharmacist throughout Massachusetts, lending his expertise and compassion to various practice sites between 1964 and 1974—he even owned a pharmacy during this time. He then shifted gears and became the Director of Professional Relations at Pilgrim Health Applications for four years, from 1974 to 1978, before advancing as an administrator in the role of Executive Director at the Massachusetts State Pharmaceutical Association from 1978 to 1984. In this position, he was responsible for all aspects of the organization's business, which included administering insurance programs and being the registered lobbyist. In 1984, Mr. Stewart was recruited by Syntex Laboratories, Inc. in Palo Alto, California, to lead as Manager of Industry Affairs, a newly created department whose mission was to develop new business opportunities in the booming Managed Healthcare marketplace.

In the midst of heading the new department at Syntex, Mr. Stewart bolstered his executive skills by earning a Master of Business Administration from Pepperdine University in 1988. The degree would serve him well as he embarked on the next stage of his career—starting his own company. Creating and building The Stewart Group, an executive search firm in pharmaceuticals and medical businesses, Mr. Stewart noted, was the highlight of his career. The company, which was initially based on the West Coast, relocated to Ponte Vedra Beach, Florida, and became incorporated as The Stewart Search Group, Inc., while doing business as The Stewart Group, in 1992. Over the years, the firm has expanded, and now specializes in health care, pharmaceutical and biotechnology, managed care, medical, consumer, information technology, and recruitment, among other areas.

In addition to his primary responsibilities, Mr. Stewart was active as a member of the capital budget committee in the town of Marshfield in Massachusetts from 1980 to 1983, the advisory board for the School of Business at the University of Southern California from 1984 to 1988, and has held numerous volunteer positions at associations and other organizations. He has found success as a writer and editor as a former member of the Edition Board at U.S. Pharmacist Magazine and the publisher of several articles over the years. Mr. Stewart has also kept abreast of advances within his field as a Fellow of the American College of Apothecaries and a member of the American Pharmaceutical Association, the California Pharmaceutical Association, the Society of Consumer Affairs Professionals, and the California Association of Personnel Consultants. He is also active as a district deputy within the Knights of Columbus.

In his spare time, Mr. Stewart enjoys playing golf and tennis, and spending time with his family, which consists of his wife of more than 50 years, Linda, four children, and seven grandchildren. 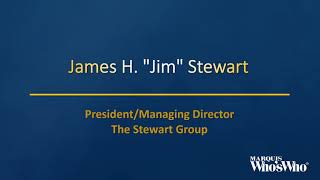