Mr. Gill, a retired librarian, sits with Star Jones to discuss his career

HOUSTON, TX, April 01, 2021 /24-7PressRelease/ -- Gerald Lawson Gill has participated in The Star Treatment, a prestigious video series hosted by renowned lawyer and television personality, Star Jones. This premier video series is extremely limited — Marquis Who's Who qualifies 500 listees on an annual basis for this elite service. Backed by a storied career in media that spans more than two decades, Star works closely with Marquis listees to assist with networking goals and commemorative efforts that can be shared with a worldwide audience.

Mr. Gill, a retired librarian and professor emeritus, is a deeply focused advocate for reading. "Failure got me started," he said. "I was a failure, in the second grade of elementary school, I was doing very poorly… and I had to repeat." He had behavioral issues stemming from his inability to read. As a result, his parents were worried about his progress. Illiteracy had other impacts on Mr. Gill's education, as he was unable to solve mathematical word problems. His parents determined that he was simply not trying hard enough, but even with multiple tutors, he was still reading three grade levels behind by the time he reached the fourth grade. At this point, his parents took drastic action, transferring him to a special school for children with reading difficulties. "Rather than reading being a portal to another world," he explained, "it was a door slamming in my face."

After losing another grade in an effort to improve his literacy, Mr. Gill came to understand the beauty of words, and that made it click for him. Now back on track, Mr. Gill became fascinated by science and science fiction, and he also fondly remembers reading in Latin, as it taught him English "better than English taught me English." While he was in high school, Mr. Gill's father purchased a collection of books, "The Great Books of the Western World," which changed his life.

Passionate about the concept of a liberal education, Mr. Gill was enthusiastic about producing well-rounded individuals, rather than specific and narrowly-trained individuals to fill specific jobs and careers. For his part, he took a number of language courses, as well as arts, science, philosophy, and even dance. He also pursued post-graduate coursework in business and law. He spent many happy hours in the library, studying his various fields.

"My recreational reading turned out to be the philosophy of knowledge related to intellectual history," said Mr. Gill, and he came to focus on "The Dictionary of the History of New Ideas," which covered a variety of interesting fields from science to philosophy. Star concluded the interview with a quote from the great Abraham Lincoln, "A capacity and taste for reading gives access to whatever has already been discovered by others." With a passionate and focused mind, and a strong desire to overcome hardship and persevere, Mr. Gill is surely worthy of the Star Treatment. 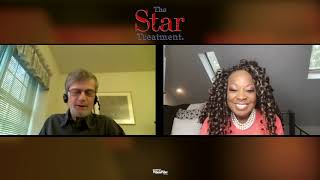