Mary K. Spore Alhadef Praised for Her Work as a Librarian

Ms. Alhadef has devoted her life to books and teaching

PALO ALTO, CA, April 02, 2021 /24-7PressRelease/ -- Mary K. Spore Alhadef has been included in Marquis Who's Who. As in all Marquis Who's Who biographical volumes, individuals profiled are selected on the basis of current reference value. Factors such as position, noteworthy accomplishments, visibility, and prominence in a field are all taken into account during the selection process.

Working in libraries since the 1960s, Mary K. Spore Alhadef has built a substantial career spanning seven decades on a foundation of knowledge, helpfulness, warmth, and great passion. Upon her recent retirement after 41 years as a general reference and local history and archives librarian at Redwood City Public Library, Ms. Spore Alhadef looks back at a rewarding professional life.

Born and raised in Boston, Massachusetts, in the 1940s, Ms. Spore Alhadef's first passion was reading about history; as a Bostonian, she noted, it's hard to grow up in the city and not have an interest in the subject. As a glimpse into her future, she used to set up her books in the house like a library for children, but because there weren't any children in the neighborhood to read the books, she consumed them all herself. She spent 12 years in a convent school throughout her youth and was always smart with a good work ethic. Her parents served as great influences in her life, as did her aunt, who worked for the city until she was 70 years old. Ms. Spore Alhadef hoped to become a history teacher after graduating from high school.

While an undergraduate at Boston College—where the only courses available for women were nursing and teaching—she realized that it while it was mandated every school had a history teacher, what institutions really wanted was one who could also serve as a football coach. This meant that her male classmates who were capable of coaching sports would get the jobs; additionally, in those days, she said, it wasn't expected for women to last long in the education field. Her first job at that time was within the college's libraries, and it was there that she found her true calling—she greatly enjoyed being around librarians and taking part in the work they did, shelving books, moving books, helping people, and soon no longer had interest in being a high school teacher. After earning her Bachelor of Science in 1965, she received recommendation letters from Father Connolly, the director of libraries at Boston College, which allowed her to enroll in library school. Eleven months later, she had a Master of Library Science from Peabody College.

Her career began where the seeds of it were planted—as the assistant director of libraries at Boston College from 1966 to 1968. She then became a librarian at Weston College School of Theology, St. Patrick's Seminary in Menlo Park, California, and a reference librarian at Graduate Theological Union Library in Berkeley, California, all between 1968 and 1977. She especially loved her time working at the seminary, from 1973 to 1976, where she helped move its collection of books and archives into Cambridge from way out in the country. Ms. Spore Ahadef joined the staff of Redwood City Public Library in 1978 as an audio-visual librarian and remained in that role until 2006, at which point she became the general reference and history and archives librarian until her retirement in 2019. Her area of expertise in her field was in cataloging.

Outside of her primary positions, Ms. Spore Ahadef was active as a member of the American Theological Library Association from 1969 to 2009, and has been a board member within the Archives Committee for the Redwood City Public Library since 2019. She has authored chapters in the books, "Redwood City: A Hometown History" and "150th Anniversary Book," published numerous papers, given speeches, and was interviewed by Korean Television in 2018.

Throughout her lengthy career, Ms. Spore Ahadef, who was 75 when she retired, is proud that while every library she worked at had its challenges, she was able to adapt to all of them and always learned what had to be learned in order to the job at hand. She feels fortunate that she found just the right profession to pursue as she was able to utilize the intellectual skills and education she received and had the natural instincts to help others. She encouraged those interested in following in her footsteps to get a good education in whatever subject they're interested in. She hopes to be remembered as someone who was funny, kind, and extremely helpful.

Ms. Spore Ahadef also attributes much of her success to her late husband of 28 years, John Alhadef, a librarian, clergyman, and college professor who always supported and encouraged her through any difficult times. 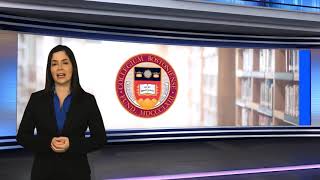