Barbara A. Chalk, RN Honored for Excellence in Nursing

Ms. Chalk has excelled as a medical and surgical nurse for more than 40 years

VIRGINIA BEACH, VA, April 02, 2021 /24-7PressRelease/ -- Barbara A. Chalk, RN has been included in Marquis Who's Who. As in all Marquis Who's Who biographical volumes, individuals profiled are selected on the basis of current reference value. Factors such as position, noteworthy accomplishments, visibility, and prominence in a field are all taken into account during the selection process.

A renowned medical and surgical nurse with more than 40 years of professional experience in her field, Barbara A. Chalk, RN dedicated herself to bettering the lives of many through hard work, compassion for others, and a genuine love for the job. Prior to her retirement in 2000, Ms. Chalk served as the clinical coordinator of the neurosurgery operating room at Sentara Norfolk General Hospital in Virginia, a position she held since 1975.

While she was a natural as a nurse, Ms. Chalk initially wanted to be a dietician. Though it's unclear what exactly changed her mind, her cousin, Rita, and her cousin's mother were nurses. She decided to change course and pursue a career as a nurse, which began after earning a diploma in nursing from the House of Good Samaritan Hospital in 1957. She worked as a staff nurse in the operating room of the hospital for two years, then advanced to the role of head nurse of the neurosurgery operating room at the University of Virginia Hospital, where she remained until 1975. Between the two posts, she gained experience and expertise in assisting in general surgery, plastic surgery, and brain tumor, intracranial aneurisms, and spinal work procedures—at one point taking care of up to 11 doctors on a given day. Her 16 years in the operating room prepared her well for her administrative position at Sentara Norfolk General Hospital.

In addition to her primary responsibilities, Ms. Chalk was extremely active throughout her career within the nursing community. She served many roles within the American Association of Neuroscience Nurses, from Chairman of its Admissions Commission from 1973 to 1975 to President-Elect from 1981 to 1982. She has also been the Publicity Chairman and President of the organization's Southeastern Chapter of Virginia, and was Vice President Association of University Registered Nurses from 1984 to 1985. She has volunteered with both the Parkinson's Support Group and Sentara Heart Hospital since 2000, and has sat on the board of directors for the American Parkinson Disease Association since 2003.

If her on-duty and committee services weren't enough, Ms. Chalk has also contributed as co-editor of "Core Curriculum for Operating Room Nurses-Neurosurgery" and the author of articles for professional journals, including the American Association of Neurological Surgeons. As a testament to her dedication to helping others, she received the Dr. Walter Atkinson Star Medal Award in 1957 and a Certificate of Merit by the American Parkinson Disease Association in 2001.

In retirement, when she isn't volunteering, Ms. Chalk enjoys spending her time with needlepoint and making ceramics. To those who wish to follow in her footsteps and pursue a career in the medical field, she encouraged that, by doing so, "you are guaranteed a job." With thousands upon thousands of sick people who need help every single day, she said that any role, be it a nurse or pharmacist or administrator, would be a good one to pursue. Ms. Chalk said she would like to be remembered as a caring person for the profession who has helped countless patients in surgery. She would even go to visit with them the day after their procedures, checking to make sure they were okay and taken care of. She has always enjoyed the work and the impact she was able to have. 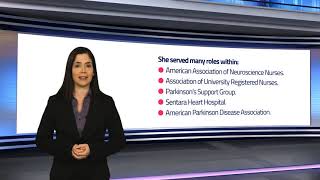