Jerry Kenneth Benson, PhD Praised for His Dedication as a Sociology Teacher

Backed by 40 years of contributions to education, Dr. Benson attained emeritus status in 2006

COLUMBIA, MO, April 06, 2021 /24-7PressRelease/ -- Jerry Kenneth Benson, PhD has been included in Marquis Who's Who. As in all Marquis Who's Who biographical volumes, individuals profiled are selected on the basis of current reference value. Factors such as position, noteworthy accomplishments, visibility, and prominence in a field are all taken into account during the selection process.

Driven by a love of education and a desire to make contributions to the field of sociology, Jerry Kenneth Benson, PhD, has dedicated more than 40 years to molding young minds around the world. Since 1966, he has made a significant impact on the lives of countless students at the University of Missouri, Columbia—where he was honored with the status of Professor Emeritus in 2006.

Dr. Benson began his professional journey while still pursuing his PhD, as an instructor at North Texas State University from 1964 to 1965. He had such a natural affinity for teaching that the following year, in 1966, he landed a job at the University of Missouri, Columbia, where he would remain for the rest of his career. He served as an assistant professor there from 1966 to 1985 before advancing to the role of full professor in 1986, in which he excelled until his official retirement in 2006. In the midst of those decades, he also found success as chair of the university's Department of Sociology in 1984, then from 1986 to 1988, and again from 1999 to 2002.

Outside of his primary teaching responsibilities, Dr. Benson served as a treasurer for the Columbia chapter of the National Education Association in the 1970s and received a special appointment as a Fulbright scholar and visiting professor at Gothenburg University in Sweden from 1985 to 1986. Considering this a milestone, he was appointed in both sociology and in the business school of the university. Additionally, he was chair of the Peace Studies Committee and Minority Affairs Committee within the University of Missouri from 2005 to 2006. Dr. Benson was also not only an influential figure in and around the lecture hall; a contributing writer of more than 80 articles for professional journals, he co-authored the book, "Coordinating Human Services" in 1975, was active as an associate editor of The Sociological Quarterly, and has spoken at numerous meetings and conferences over the course of several decades. One paper of his, titled "The Interorganizational Network as a Political Economy," was published in Administrative Science Quarterly in 1975 and continues to be frequently cited and re-published in textbooks to this day.

A longtime member of such organizations as the American Sociological Association and the Academy of Management, Dr. Benson has found the most rewarding aspect of his career has been observing the success of his former students, many of whom became educators themselves. In retirement, he enjoys music, playing chess, and fishing, as well as spending time with his wife of more than 50 years, Norma, their four children, and 10 grandchildren. 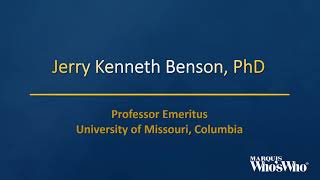