BOYNTON BEACH, FL, April 06, 2021 /24-7PressRelease/ -- Edwin R. Loder, PhD has been included in Marquis Who's Who. As in all Marquis Who's Who biographical volumes, individuals profiled are selected on the basis of current reference value. Factors such as position, noteworthy accomplishments, visibility, and prominence in a field are all taken into account during the selection process.

For more than 50 years, Edwin R. Loder, PhD excelled in the field of chemistry as a gifted and compassionate scientist, researcher, and administrator leading up to his official retirement in 2010.

Prior to embarking on his professional path, Dr. Loder enlisted in the U.S. Navy out of high school in 1942 and honed his skills and experience in the military until 1952. Although he initially wanted to pursue a career as an aeronautical engineer, he found that the program filled up quickly and so he shifted his academic focus to chemical engineering. He earned a Bachelor of Arts from Utica College within Syracuse University in 1952 and continued his education at Massachusetts Institute of Technology, where he obtained a Doctor of Philosophy in 1955.

Upon graduation from MIT, Dr. Loder launched his career as a senior chemist at Eastman Kodak in New York, where he found much success from 1955 to 1959. He subsequently advanced in his field by becoming the Director of Research at Maumee Chemical in Toledo, Ohio, from 1959 to 1965, acquiring administrative experience that would be utilized for the rest of his professional life. He served as the laboratory manager at GAF (General Anline & Film Corporation), now known as Ansco, from 1965 to 1966, the Executive Vice President of Operations at DuBois Chemical in Cincinnati from 1955 to 1985, and the President of Delray Chemicals in Florida from 1985 to 1993. Prior to his retirement, he was successful as the President of ERL & Associates, which he led for 25 years, from 1985 to 2010.

As a leader, Dr. Loder attributed his success to always being a good listener, being willing to give someone a chance, and spreading rewards among those who contributed. In addition, he hired the best and strongest people he could find for any job that he had available and made sure to get out their way and let them work. Upon reflection of his career, he recalled his most memorable experience was surviving a chemical plant explosion on May 10, 1962.

Outside of his primary endeavors, Dr. Loder also contributed as President and Chairman of Junior Achievement in Cincinnati from 1969 to 1975. A fellow of the American Institute of Chemists, he has remained involved in his professional field as a longtime affiliate of the American Society for Quality, the American Association for the Advancement of Science, and the American Chemical Society. As a testament to his accomplishments over the course of five decades, he has been recognized in the first edition of Who's Who in Science and Engineering.

Happy in retirement, Dr. Loder enjoys spending time with his wife of 50 years, Charlotte, four children, 10 grandchildren, and 12 great-grandchildren. He urged that aspiring professionals always "think twice before you do or say something, hire the best people to do the job, and then get out of their way…but don't be afraid to step up if need be [in order] to put things back in line." 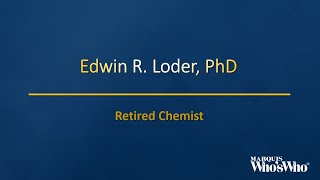