Sean H. Ponce Honored for Work in Music and Construction

A distinguished industry professional, Mr. Ponce had successful careers in music and construction

FOOTHILL RANCH, CA, April 06, 2021 /24-7PressRelease/ -- Sean H. Ponce has been included in Marquis Who's Who. As in all Marquis Who's Who biographical volumes, individuals profiled are selected on the basis of current reference value. Factors such as position, noteworthy accomplishments, visibility, and prominence in a field are all taken into account during the selection process.

Having accrued more than 35 years of experience in the construction industry, Sean H. Ponce currently serves as the owner of Ponce Construction based in Orange County, California. Since 1982, he has led the full-service pool and landscape design and installation company to success with a Pool and Landscape Design Award and Best of Home Improvement recognition.

Offering a variety of construction projects, such as pools, spas, fountains, waterfalls, decks and more, Mr. Ponce is renowned for his company's artisanship and customer service. With this sentiment, he recalls his career highlight has been receiving 76 five-star reviews on Google and bringing his initial designs to life in 3D. In addition to his management of of Ponce Construction, Mr. Ponce also designs freelance for Victory Pools, Nuance Construction and Omega Construction.

A lover of music, he previously performed with the bands The Flames and Hot Ticket as a pianist, guitarist and singer from 1968 to 1985. He and his wife, Cindy, started out playing in a band; at the time, had signed a contract with Harmony Artists, which stipulated that they could not see each other romantically. This led to Cindy's dismissal from the band. Thereafter, she went on to manage a micropub and was making more money than the whole band by herself. As for Sean, he ended up working with James Brown, though that partnership fell through after the latter's arrest. Through it all, he remembered his love for Cindy and married her. Once Cindy became pregnant, Mr. Ponce knew that he must pursue a more stable form of employment, so he followed in his father's footsteps and pursued a career in construction. He began as a mason, pouring concrete, and the rest was history.

Mr. Ponce holds a security certificate for security and investigative industries from the State of California Department of Consumer Affairs. Additionally, he has C-8 concrete, C-27 landscaping and C-53 pools and spas classifications, and a home improvement certification from the Contractor's State License Board. He also received three years of education from Cerritos College. To remain abreast of his industry, Mr. Ponce maintains affiliation with the California Landscape Contractors Association, the Better Business Bureau and the Landscaper's Association. Likewise, he sits on the board of directors for the Homeowner's Association.

Mr. Ponce has been recognized with a number of awards and honors, commemorating his achievements in the field. Some of these accolades include a Pool and Landscape Design Award, a Most Pipes in Irrigation designation, a Best of Home Improvement award, various Houzz Awards from 2015 to 2021, and a Home Guide Award for 2019.

Reflecting on his career, Mr. Ponce attributes his success to the notion of "practice makes perfect," along with hard work and persistence to overcome obstacles. He also owes thanks to his father for exposing him to the industry from a young age and to his supportive family. 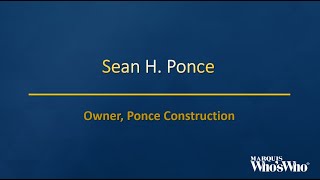