With a passion for caring for animals, Dr. Sutton has flourished as a veterinarian for nearly two decades

BILOXI, MS, April 06, 2021 /24-7PressRelease/ -- Jennifer Ann Sutton, BS, DVM, MBA has been included in Marquis Who's Who. As in all Marquis Who's Who biographical volumes, individuals profiled are selected on the basis of current reference value. Factors such as position, noteworthy accomplishments, visibility, and prominence in a field are all taken into account during the selection process.

Dedicated to bettering the lives of animals and the people who care for them for two decades now, Jennifer Ann Sutton, BS, DVM, MBA has found success as a veterinarian and an administrator at Gulf Coast Veterinary Emergency Hospital and Beach View Veterinary Hospital, LLC in Mississippi. Through hard work and compassion for others, she has not only excelled in her primary fields, which include internal medicine and oncology, but community service—from social work to social justice.

Born and raised in Washington, D.C., Dr. Sutton initially thought she wanted to pursue a career as a regular physician, but did not want to be isolated into one specialty. She earned a Bachelor of Science in biology from Millsaps College in 1992, during which time she decided that veterinary medicine would allow her to practice in a variety of specialties and functions. She then obtained a Doctor of Veterinary Medicine from the Louisiana State University School of Veterinary Medicine in 1998. In 2019, in the midst of her career, she completed her education with a Master of Business Administration from Louisiana State University. Over the course of her education, Dr. Sutton has acquired certifications as an Emergency Healthcare Professional, Emergency Disaster Professional, Professional Coach with emphasis in generative coaching techniques, and Teaching in the Healthcare Profession. She is also licensed to practice by the Mississippi Board of Veterinary Medicine, the Louisiana Board of Veterinary Medicine, and the U.S. Department of Agriculture Animal and Plant Health Inspection Service.

Dr. Sutton's career began in 2002 when she took the reins as President, Partner, and Veterinarian at Gulf Coast Veterinary Emergency Hospital in Biloxi, where she continues to excel to this day. In the midst of her responsibilities there, she also served as the interim executive director within Court Appointed Special Advocates (CASA) of Hancock County in 2013—a program that provides abused and neglected children with significant advocacy in the court system and secures a safe and nurturing home through recruiting, training, and a supportive network of volunteers. Since 2015, she has also been active as a Partner and Veterinarian at Beach View Veterinary Hospital, LLC in Biloxi.

With a lifelong passion for community engagement and advocating for marginalized populations, Dr. Sutton has lent her skills and expertise to many organizations, such as Jackson County Search and Rescue, the Hancock County Abuse Task Force, Bridges Out of Poverty, Goodwill, Kairos Prison Ministry International, the Open Door Homeless Coalition, Leadership Gulf Coast, and Disability Connection. Between 2009 and 2017, she was extremely active with both the Boy Scouts of America and Girl Scouts of America, and sat as an advisory council member at St. Vincent de Paul Catholic School. She sees her work in the community as extremely rewarding and a highlight of her career, and even finds it more fulfilling than her professional work. In addition, she has been heavily involved with the Mississippi Gulf Coast Medical Reserve Corps, the Mississippi Crisis Response Network, the Mississippi Animal Rescue Team, the USDA National Animal Emergency Response Corps, the Volunteers in Preparedness Registry, the Mississippi Board of Animal Health, and the Mississippi Animal Assisted Crisis Response Team. She has also contributed her services to Pet Partners Therapy Animals, the Mississippi Department of Rehabilitation Services, and the Hope Credit Union Business Advisory Committee.

A renowned figure in the field of veterinary medicine, Dr. Sutton has lectured on various animal-related topics across numerous venues, including middle and high schools, since 2010. These lectures have covered such issues as "Emergency Medical Assessment and Care of Animals in Disasters," "Top Five Small Animal Emergencies Encountered in Disasters," and the "Versatility of Search and Rescue Dogs." As a testament to all the work she's done throughout her career, she has been recognized with several accolades. She was a "Caring Woman" finalist at the Biloxi Regional Medical Center and a Boy Scouts of America Club Scouter of the Year in 2014, and received the "Forever Young" Mentor Award by the Mississippi Gulf Coast Young Professionals in 2016, the Open Doors Homeless Coalition Visionary Award in 2017, and the Karen Sock Woman of Achievement Award by Lighthouse Business and Professional Women in 2018, among several others.

Looking toward the future, Dr. Sutton plans to grow her business to fill niches in the animal care industry that are not being met. She hopes that future professionals will be guided by their passions rather than money and recognition—"Be true to yourself and follow your heart," she urged. Hoping to leave behind a legacy not just as a veterinarian but as a humanitarian and community member, Dr. Sutton has four children with her husband, Jeffrey, also a Doctor of Veterinary Medicine. 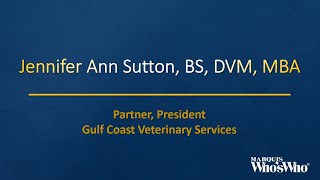