Naturally gifted as a teacher, Dr. Youngberg had a remarkable career in education spanning four decades

VERONA, MO, April 06, 2021 /24-7PressRelease/ -- Charlotte A. Youngberg, PhD, ThD, DD has been included in Marquis Who's Who. As in all Marquis Who's Who biographical volumes, individuals profiled are selected on the basis of current reference value. Factors such as position, noteworthy accomplishments, visibility, and prominence in a field are all taken into account during the selection process.

Driven by family, education, and her faith, Dr. Charlotte Youngberg built an accomplished and impactful career as a teacher and an administrator over the course of more than 40 years. Although retired from her primary profession since 2004, she has remained active as the co-owner of Youngberg Chapel, a private Christian-oriented facility located in the historical Spring River Valley in Verona, Missouri, which she built with her late husband in 2013.

A pioneer in the field of special education, Dr. Youngberg gravitated toward her professional path at a young age—always loving books and knowing deep down that she would pursue teaching. Raised on an Iowa farm with four siblings and a strong work ethic, she learned from her parents the importance of being self-sufficient and setting personal goals. Her mother nurtured her love for books by reading to her and her brother; early on, she showed her the word 'mother' in the dictionary when she was just a toddler, prompting her to teach herself to find it by exploring the text. It didn't take long for her to be a devourer of books herself, which she saw as a "magic" escape.

Additionally, growing up, she developed a passion for helping others academically. Upon graduating from high school, she received a scholarship to Cedar Falls Iowa State Teachers College, now the University of Northern Iowa, from which she graduated with an Executive Doctorate in Business in elementary education in 1958—completing four years of college in three. Over the course of her career as a teacher, Dr. Youngberg continued her own education, earning a Master of Education from DePaul University in 1966 and a Doctor of Divinity in Christian Counseling, a Doctor of Theology, and a Doctor of Philosophy in Theology and Christian Counseling from Christian Bible College and Seminary in 2000, 2003, and 2005, respectively.

Dr. Youngberg launched her career as an elementary teacher at Des Moines Individual School District in 1958. After one year, she held the same position at Glenview Public Schools until 1961 when she began teaching elementary and serving as the psychological education diagnostician at Schaumburg District Schools—where she remained until 1969. Naturally gifted as a teacher, she had a remarkable rapport with children from her very first day on the job; she also did not have to work hard to maintain strong discipline. It was while teaching in the Chicago area that she was first approached about focusing her work on special education. There was a woman in the district, named Dr. Jeannie McCarthy, a well-known figure on the forefront of special education, who sought out the strongest teachers to help start her special education program—Dr. Youngberg was one of six people selected to be part of that development. Dr. McCarthy became a great mentor of hers as she continued in her career, instilling in her a passion for helping those with learning disabilities.

Over time, Dr. Youngberg has become an expert in the field she adopted, often sharing her techniques with teachers, parents, principals, and superintendents. In the classroom, she was quick to learn what the students' needs were, teach them accordingly, and always maintain a positive attitude—she would send out reward notes to their parents with glowing, constructive write-ups regarding their children's status and progress. Considering teaching to be an art form, Dr. Youngberg always strived to keep her young students inspired while also balancing their disability needs, a major one being ADHD. She considers her greatest achievement to be her ability to teach reading to any child who came into her classroom, which she saw as a miraculous thing for many of the students. Speaking of her own inspiration, she said, "The reward is the child doing better and moving forward in their lives." When the time came to retire, it was very difficult to leave teaching and her students.

Devoted to her family and church, Dr. Youngberg, alongside her husband, opened numerous private businesses, including Youngberg Ranch, Youngberg Chapel, Youngberg Water Company, and Youngberg Cemetery. She authored the book "Oscar, the Perky Gray Mouse" in 2005 and keeps busy with her many hobbies, which includes playing the organ, reading, writing, and sewing. She has four children, seven grandchildren, and eight great-grandchildren.

To aspiring educators out there, Dr. Youngberg urged, "Don't ever give up and always keep trying…always be willing to learn new skills. Emphasize the positive to the student." 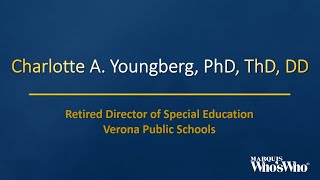