Julie Marie Rubel Honored for Entrepreneurship and a Life Well-Lived

Ms. Rubel has excelled as the owner of Crystal Lake Cave since 2012

DUBUQUE, IA, April 06, 2021 /24-7PressRelease/ -- Julie Marie Rubel has been included in Marquis Who's Who. As in all Marquis Who's Who biographical volumes, individuals profiled are selected on the basis of current reference value. Factors such as position, noteworthy accomplishments, visibility, and prominence in a field are all taken into account during the selection process.

Through compassion, sincerity, and an expertise in customer service, Julie Marie Rubel found great personal and professional success as the owner of Crystal Lake Cave, LLC, Iowa's "natural masterpiece" and historical center where attendees can spelunk, mine, and receive guided tours through its three-quarters of a mile of cave tunnels.

Born and raised on a farm in Bellevue, Iowa, Ms. Rubel was always determined and gravitated toward her professional path from a young age—her parents, James and Doris Rubel, purchased the Crystal Lake Cave property in 1978 after it opened to the public in 1932 and passed through numerous families. The cave, which was discovered by miners in 1868, is home to hundreds of thousands of crystal formations of various sizes and shapes. Upon graduation from high school, she attended the University of Dubuque, where she graduated with a Bachelor of Business Administration and a minor in Aviation Management in 1991. Ms. Rubel then honed her skills in sales and as an administrator when she became the store manager at Bekins Box and Ship in Los Angeles.

In 2012, by which point her parents had owned and managed Crystal Lake Cave for 34 years, Ms. Rubel acquired the business—which was the highlight of her career. She aimed to develop it into something bigger, but not at the commercial level. Mostly a tour-oriented location when she inherited it, she added a gem mining sluice with which visitors could pan for minerals and recently had a nine-hole golf course built on the property. In her role at the center, she thrived—hiring and training new staff, ordering products, presiding over the marketing for the business as well as guides, and always putting the customers first. She loved talking to guests and learning about their backgrounds and where they came from. As a testament to her leadership and innovation, Crystal Lake Cave was voted by TripAdvisor as one of the top 10 percent of tourist attractions to see in the world.

Outside of her primary endeavors, Ms. Rubel always maintained a great relationship with her alma mater, the University of Dubuque, where she created the "Student of the Year Award," which she received herself in 1991. A renowned figure in her industry, she was a member of several organizations, such as the Jackson County Area Tourism Association, the Dubuque Area of Chamber of Commerce, the Eastern Iowa Tourism Association, and the National Caves Association.

Although Ms. Rubel passed away in Feb. 2021, her dreams of continuing to run Crystal Lake Cave, sharing the beauty of it with new guests, and booming business by 40 percent now lives on in her daughters, Lexi and Kelsey Ramirez, who grew up around the business and will be taking it over. While it was shut down due to COVID-19, there are plans now for the cave to open back up for the public in spring 2021. With her mantra of "Do unto others what you would want done to you" and believing in fairness and honesty, Ms. Rubel wanted to be remembered as someone who was passionate about what she did. 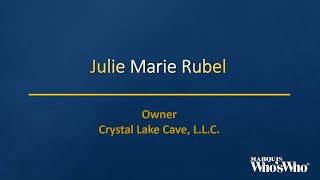