Dr. Steele served Albany State University in numerous capacities until his retirement in 2003

ALBANY, GA, April 06, 2021 /24-7PressRelease/ -- Jack Steele, PhD has been included in Marquis Who's Who. As in all Marquis Who's Who biographical volumes, individuals profiled are selected on the basis of current reference value. Factors such as position, noteworthy accomplishments, visibility, and prominence in a field are all taken into account during the selection process.

Dr. Jack Steele knew he wanted to pursue a profession in the medical field from an early age—an aspiration that led to a prolific career as a chemist, an educator, and a scientific journal contributor that has lasted more than 50 years.

Growing up in Indiana, Dr. Steele often joined his father, Dick J. Steele, a physician and general practitioner, on house calls in their rural town of Greencastle. By the time he was in sixth grade, he decided he was going to focus on either geology, pharmacy, or chemistry in his future. After high school, Dr. Steele attended DePauw University, where he was inspired to pursue chemistry as his field of choice after seeing an exciting presentation by one of his professors, Dr. John Ricketts, who, along with Dr. Eugene Schwartz and Dr. Jack Cool, gave him a real love for the subject. In his senior year, he served as an undergraduate laboratory assistant in the department of general and analytical chemistry.

In 1964, Dr. Steele earned a Bachelor of Arts in Chemistry from the university, and then received his Doctor of Philosophy in Inorganic Chemistry from the University of Kentucky in 1968 — while there, he was active as a recitation instructor while also serving as a graduate research assistant at the National Science Foundation.

Dr. Steele started his career as a teaching intern and postdoctoral researcher at Washington State University from 1968 to 1970. From there, he was made assistant professor in chemistry at Albany State University between 1970 and 1975, served as associate professor until 1980, and then promoted to professor from 1980 to 1985. In 1985, he switched from chairman to coordinator of chemistry and physics at the university, a position he remained in until his retirement in 2003. Over the course of his teaching career, Dr. Steele always prioritized increasing opportunities for minority students.

Outside of Albany State, Dr. Steele founded the Southwest Georgia section of the American Chemical Society, after many meetings and urgings before National section representatives in Washington, D.C., which he considers his proudest achievement. Just a few short years after it was made official, he and his colleagues received an award for being the "best small section" in the nation. He has served as contributor, editor, and reviewer of several scientific publications throughout his career, such as the Journal of Chemical Education and the U.S. Environmental Protection Agency, and appeared on many television programs as an interviewee. Since 1978, he has excelled in the role of extramural reviewer for the National Science Foundation. While at the University of Kentucky, Dr. Steele scored in the 99th percentile on the GRE in chemistry.

While in the thick of research work, Dr. Steele found that he was having lots of fun—which is why he chose his field in the first place. He was working 60 hours a week and having a great time throughout.

In recognition of his numerous impressive achievements, Dr. Steele has received accolades befitting his accomplishments. Since 1988, he has been a grantee of both the Charles Stewart Mott Foundation and National Institutes of Health, as well as Minority Schools of Biomedical Support from 1972 to 1977. He also received the Commander Award and Letter Jacket Award from DePauw University four years in a row. Other accolades include the Clinical Chemistry Recognition Award, an Outstanding service Award, and being named Best and Most Popular Teacher by Albany State University.

Dr. Steele attributes his successful life and career to mentors in his life, including his late wife, Carolyn B. Steele, colleagues Dr. L.T. Crimmins and Dr. Tom Johnson at Albany Internal Medicine, and the many professors who helped shape his path through encouragement and direction. Looking toward the future, he hopes that the next generation of professionals take the following advice to heart: "Take your job seriously but never yourself," he said. 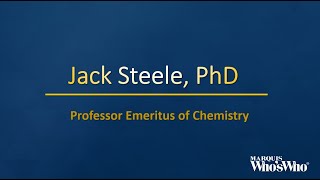