Sharon L. Telleen, PhD Honored for Excellence as a Researcher and Volunteer

Backed by four decades of expertise, Dr. Telleen is highly regarded for her knowledge in psychology and public health

WILMETTE, IL, April 06, 2021 /24-7PressRelease/ -- Sharon L. Telleen, PhD has been included in Marquis Who's Who. As in all Marquis Who's Who biographical volumes, individuals profiled are selected on the basis of current reference value. Factors such as position, noteworthy accomplishments, visibility, and prominence in a field are all taken into account during the selection process.

Motivated by her passion for children's health and growing young minds, Sharon L. Telleen, Ph.D. has dedicated more than 40 years toward education and her chosen fields of psychology and public health. After nearly three decades at the University of Illinois at Chicago, where she inspired hundreds of students, she was honored with the title of Research Associate Professor Emerita in 2011 and has since focused on building healthy communities through volunteer services.

While growing up in Washington, D.C., Dr. Telleen developed her humanitarian nature from her parents Floyd and Louise Anderson; her father was a civil servant in the U.S. Department of the Navy as a professional naval engineer while her mother was an activist and volunteer. She spent much of her upbringing working with local community groups in Washington. By the time she graduated from high school, she knew she wanted to pursue a career in which she worked with children, ultimately deciding on psychology in order to find healthy outcomes for them. She completed coursework at the Lutheran Deaconess Hospital within the University of Chicago School of Social Service Administration in 1966, after which she earned a Bachelor of Arts in Education from Augustana College in 1968. She expanded her knowledge further by obtaining a Master of Education and a Doctor of Philosophy from the University of Maryland in 1969 and 1976, respectively.

Initially serving as a graduate assistant within the Department of Human Development at the University of Maryland, Dr. Telleen advanced to the role of instructor there from 1976 to 1977. She began lecturing in the department and ultimately became an assistant professor in 1980. She became a licensed psychologist in Maryland in 1981 and has been licensed in Illinois since 1982. Relocating to the University of Illinois at Chicago, School of Public Health, she was one of the original faculty in the planning and development of the university's federally funded Maternal and Child Health Training Program. She also found further success as a research associate professor at the University of Illinois at Chicago— where she would remain for the rest of her career.

Outside of her primary posts in education, Dr. Telleen has also lent her expertise as an advisory board member for the School of Social Work at Loyola University-Chicago. Civically, she has been engaged in community issues since her youth, specifically working to help the poor and building healthier living environments. As a teenager, she was involved in assisting those on welfare who needed jobs. In addition to working with the church and the Girl Scouts, she later served as a board member of the State of Maryland, White House Conference on Families from 1979 to 1980, a volunteer consultant for a local family support program at Family Focus, Evanston, IL from 1982 to 1983, and a board member of Chase Settlement House from 1994 to 2000.

In 2002, she co-authored a book titled "The Transition from Welfare to Work: Processes, Challenges, and Outcomes," highlighting her experience with people with low incomes and no health insurance and the efforts to fill in gaps in the health care system, which ultimately led to the Affordable Care Act. A gifted writer and researcher, she has authored more than 70 published works, numerous articles for professional journals, and a book chapter for the American Public Health Association. Dr. Telleen has also been active as a reviewer for articles published by the Maternal and Child Health Journal and the Journal of Health Care for the Poor and Underserved.

Despite being retired, Dr. Telleen has maintained an active involvement with new findings in her field as a member of the American Public Health Association, the American Psychological Association, and the Society for Research in Child Development among other organizations.

A life enriched by a loving husband of 40 years, Philip R. Telleen, and a proud mother of two and grandmother of three, she considers herself still "a woman on a mission" and hopes to be remembered by others for her tremendous amounts of volunteer work and being dedicated, detail-oriented, caring, and warm. 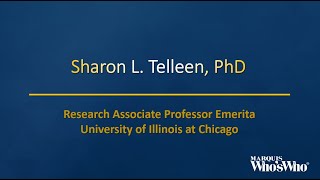