NEW YORK, NY, April 06, 2021 /24-7PressRelease/ -- Stephanie R. Cooper has participated in The Star Treatment, a prestigious video series hosted by renowned lawyer and television personality, Star Jones. This premier video series is extremely limited — Marquis Who's Who qualifies 500 listees on an annual basis for this elite service. Backed by a storied career in media that spans more than two decades, Star works closely with Marquis listees to assist with networking goals and commemorative efforts that can be shared with a worldwide audience.

Ms. Cooper gets a great deal of satisfaction from a satisfied client and a conflict resolved. Speaking with fellow attorney Star Jones, Ms. Cooper describes the interesting career transition that led to her legal career. She was a concert pianist and a chamber musician early in her career. One evening, at an after-concert party, she spoke with a classical music publicist who said, "You can do what I do." A few months later, the publicist, who was frequently overbooked with clients, surprised Ms. Cooper by sending two Bolshoi artists who had just defected during a tour in Los Angeles to Ms. Cooper. Though she initially felt underqualified, Ms. Cooper took on the challenge, rose to the occasion, and a new business was born. The work in public and media relations frequently raised legal questions and also led Ms. Cooper to wish for greater professional expertise. One day, she recalls, she woke up with the, to her, novel thought, "I could be a lawyer." She promptly took the LSAT and found a new passion in law school.

"I focus on contracts," Ms. Cooper said, when asked about her legal specialties. "The contracts may be matrimonial… or employment-related or part of my other area of practice in art and entertainment law, so I have adopted for my 'elevator speech' that I can form and dissolve relationships in almost any context." Though she has been practicing for many years, Ms. Cooper has had little trial experience as the result of her ability and commitment to settle cases without going to court. She was first taught the subtle art of alternative dispute resolution during her clerkship with Jack Weinstein, a federal judge who retired this past year at the age of 98. He also offered to appoint Ms. Cooper to be a prosecutor, but she found that she did not have the mindset for that role.

Star shared the story of when she traveled to Israel to sit with some of the women leaders of the Knesset, that country's legislative branch. "The ability to see women of different opinions come together in a very solution-oriented setting inspired me greatly." Star was struck by a group of people who gathered together with an attitude of getting work done. Ms. Cooper agreed with the sentiment, noting that women have been steadily carving a place for themselves in prominent roles, whether those roles are in government, law, or business.

When Star asked for some legal success stories, Ms. Cooper recalled when a group of real estate developers decided that they wanted to construct a tall luxury condominium tower on top of her rent-stabilized apartment building on the Upper West Side of Manhattan. Though the battle took four years, Ms. Cooper emerged victorious, and with new knowledge of the real estate world under her belt to boot. Her determined efforts allowed her to protect and benefit an entire building of residents, and she has derived a great deal of satisfaction from that knowledge. "This project really showed me the value of my law license," she says.

Apart from the law, Ms. Cooper's other great love is literature. She worked her way through law school having articles published in national magazines as well as an exercise book through Simon and Schuster. She has always been fond of writing as an art form and particularly enjoys crafting affidavits for clients in her motion practice. Prior to establishing her own firm, a former boss nicknamed her the "Affidavit Queen." When asked about the one thing she would want viewers to take from the video, Ms. Cooper expressed the hope that they keep a sense of joie de vivre in their daily lives, and show a deep passion for life and their careers that will permeate everything that they do. Exemplifying this positivity herself, there is no doubt that Ms. Cooper is a well-deserving recipient of the Star Treatment. 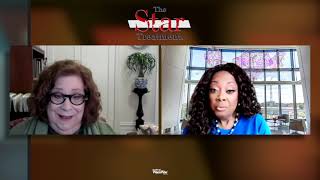