NEW HOPE, PA, April 07, 2021 /24-7PressRelease/ -- Stephen Rustom Mazda has participated in The Star Treatment, a prestigious video series hosted by renowned lawyer and television personality, Star Jones. This premier video series is extremely limited — Marquis Who's Who qualifies 500 listees on an annual basis for this elite service. Backed by a storied career in media that spans more than two decades, Star works closely with Marquis listees to assist with networking goals and commemorative efforts that can be shared with a worldwide audience.

Mr. Mazda, a renowned securities principal, has been teaching people to save money and make prudent financial decisions. "To become a general securities principal, you have to pass the Series 24 General Securities Principal Exam, administered by FINRA," Mr. Mazda explained. This involves a fair number of questions which, in his opinion, are judgment calls. All of the multiple answers are correct, in other words, but the test taker must isolate the best option. This test serves as a microcosm of the industry as a whole, as the world of finance and investment has many different potential paths, and it requires the seasoned judgment of an expert to sort out the best way forward.

When asked what a securities principal does, Mr. Mazda replied that his is a supervisory license, enabling him to monitor compliance and trading operations in stock brokerage firms. His own firm, Cantella & Co. Inc., caters to independent financial advisors that are completely independent from any overhead management structure, according to Mr. Mazda. These advisors are designing portfolios for clients based on their interests.

"Our country's securities laws require full disclosure… so if you can read, you can do research," said Mr. Mazda. His passion for both of these activities make him a natural fit for securities work. As the time-honored adage goes, "your money can work harder than you can." The magic of investment is such that compound interest can quickly snowball and bring in greater returns than contributions. With that in mind, Star brought the conversation to Mr. Mazda's short film, "401k Magic." In 1981, there were only two people in the United States that were selling and promoting 401ks. At that time, the laws regarding these accounts was not yet fully solidified, so there was a good deal of confusion regarding what could and could not be done with them. Visiting a school to discuss finance and the stock market, he gave a one-hour presentation and fielded questions from students. The next year, he returned to the school to give the presentation again. Eventually, he received contacts from a number of schools asking him to give his "401k Magic" speech. He received "compensation" for these engagements in the form of thank-you letters from the children, all the while fine-tuning his presentation to incorporate his own life lessons that helped to make him successful. This eventually led to him creating the short film, "401k Magic."

"Remember, corporations are only people," Mr. Mazda said, quoting his mother's sage advice. Before investing in a company, he advises people to do their homework into who is running the company and how it is being run. If a person does not have this information, they need to consult with knowledgeable professionals. One of the highlights of Mr. Mazda's career was securing an independent consultant position with American Trust Company to sell and promote 401ks. Over the years, he ended up setting up 66 of the first few hundred 401k plans in the country. One day, he became aware of a plan by the Reagan administration to vote on whether 401k plans would be allowed moving forward. Together with the president of American Trust Company, he phoned the head of the finance committee and the ways and means committee to persuade them to keep the law "on the books." Mr. Mazda made his presentation, and closed by sharing that custodians at a large hospital were saving a higher percentage of their income in 401ks than doctors. The presentation was a success, and the 401k was saved. With a knack for numbers and a diligent mindset, there is no doubt that Mr. Mazda is worthy of the Star Treatment. 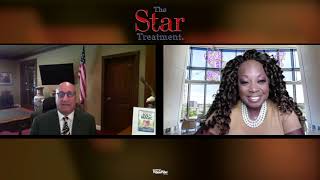