Ms. Bird, a consultant in science and engineering ethics, sits with Star to discuss her career in the field

WRENTHAM, MA, April 07, 2021 /24-7PressRelease/ -- Stephanie J. Bird, PhD has participated in The Star Treatment, a prestigious video series hosted by renowned lawyer and television personality, Star Jones. This premier video series is extremely limited — Marquis Who's Who qualifies 500 listees on an annual basis for this elite service. Backed by a storied career in media that spans more than two decades, Star works closely with Marquis listees to assist with networking goals and commemorative efforts that can be shared with a worldwide audience.

Dr. Bird, a science and engineering ethics, education, and policy consultant, has been making strides in a male-dominated field for nearly four decades. When asked about how she became involved in her profession, Dr. Bird jokingly "blamed" her mother and her high school biology teacher. "My mother was always one to highlight personal responsibility… and focus on ethical issues, and in my high school biology class, I had such a wonderful teacher, Barbara Hopper," who encouraged Dr. Bird to enter UCLA, becoming the first in her family to attend college. There, she happened to take an ethics class, and "that was the beginning of everything," she said. Pursuing undergraduate majors in both zoology and philosophy, Dr. Bird forged her own path. At the suggestion of her undergraduate advisor and mentor, Prof. Austin J. MacInnis, Dr. Bird obtained graduate degrees in neurophysiology at Yale University.

Following postdoctoral work in neuroscience at Johns Hopkins and Case Western Reserve, Dr. Bird obtained a position at the Neurosciences Research Program, which was an off-campus branch of MIT that served as a think-tank to facilitate and promote in-depth discussion of various fields of neuroscience among neuroscientists. Generally, we think of science and engineering in technological terms, without recognizing let alone considering their associated ethical, legal or social implications. Part of Dr. Bird's work involves a deep dive into the ethical issues that arise in both the practice and application of scientific research and engineering. Examples include honesty, conflicts of interest, and the welfare of research subjects, and broader ethical concerns like injustice and the violation of privacy rights of the public resulting from the misuse or abuse of research findings or techniques. "While the engineering code of ethics requires that engineers hold paramount the health and welfare of the public, putting that into practice is not always straight-forward," Dr. Bird said. One of the most rewarding aspects of Dr. Bird's teaching is seeing the sudden light of comprehension on a student's face when they grasp a challenging concept.

When asked about which scientific disciplines are most interesting, and/or ethically fascinating, Dr. Bird cited inter-species communication, as well as inter-personal communication. Additionally, astrophysics and experimentation into dark matter interest her, and she hopes that great things will come from those fields in the coming years.

Dr. Bird is proud of her professional contributions, including co-founding (with Raymond Spier) the journal Science and Engineering Ethics, now in its 27th year of publication; promoting and facilitating awareness and discussion of ethical issues among neuroscientists largely by founding (in 1983) the Social Issues Roundtable as a component of the annual meeting of the Society for Neuroscience; and developing effective elements for teaching the responsible conduct of research and the social responsibilities of scientists and engineers. At the same time, she emphasized that it is also important to her to "stop and smell the roses," and to experience and value the beauty of the world around her, not to mention the richness of the relationships she has formed with family and friends. She remembers well the lessons her mother taught her about taking personal responsibility for her own actions and not judging other people. She considers herself blessed to have been born when she was, in this country, with good health and supportive as well as loving parents. Dr. Bird feels that being a member of society is an important part of being human, and part of that is contributing to the community. For her part, Dr. Bird works with young women to mentor and encourage them to achieve their dreams. Her attitude reminded Star of a quote from Mahatma Gandhi: "The best way to find yourself is to lose yourself in helping others." With a helpful can-do attitude and a passion for helping other women succeed, there is no doubt that Dr. Bird is deserving of the Star Treatment. 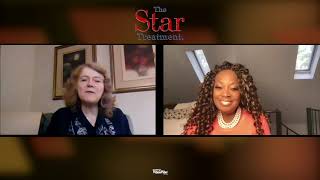