A man of many talents, Mr. Martin discusses his career in architecture with Star Jones

COLUMBUS, OH, April 09, 2021 /24-7PressRelease/ -- Lee E. Martin has participated in The Star Treatment, a prestigious video series hosted by renowned lawyer and television personality, Star Jones. This premier video series is extremely limited — Marquis Who's Who qualifies 500 listees on an annual basis for this elite service. Backed by a storied career in media that spans more than two decades, Star works closely with Marquis listees to assist with networking goals and commemorative efforts that can be shared with a worldwide audience.

An architectural expert and consultant, Mr. Martin exemplifies the values of hard work and perseverance. A playground safety inspector, an architect and a licensed pilot, he is truly a Renaissance Man, though he feels that many architects would also qualify for that title. His career path seemed only logical to him at the time, starting as a construction laborer in college. Upon leaving the military, he was wondering what he would study for his higher education, and his wife laughed, pointing out the rolls of drawings on the dining room table. It had not occurred to her that he would pursue anything but architecture. From there, the rest was history. He progressed through his education, earning his licensure and entering government work. One of the certifications that helped bolster his credentials was the playground safety inspector, and he feels that that helped him strengthen his main work as an architect.

Mr. Martin's company, has two facets: the building services side, which offers traditional construction and design services, as well as outside professional advice for clients, and the forensic side, which provides forensic litigation services to attorneys and insurance adjusters. "My areas are construction defects, delays, architectural professional liability and personal injury that involves some aspect of a building," Mr. Martin said. As Star remarked, this flexibility gives Mr. Martin the ability to handle many diverse areas of the practice.

Mr. Martin holds the distinction of being a top biller for the company, which he holds as a great honor and a highlight of his career. He had always worked hard and learned from others, and when he earned the title of top biller, it was affirmation to him that he had paid back what other people were kind enough to give him. This, again, was exemplary of the hard work and dedication of which he is most proud.

Some of the exciting projects that Mr. Martin has worked on include working on banks, savings and loans, airplane hangers, and even modular designed homeless shelters during an economic downturn in the 90s. On one occasion, he put a homeless shelter across the street from the infamous Watergate Hotel. Another rewarding project, albeit from a tragic source, was being involved in an apartment fire, where a subcontractor was being blamed for the flashover. After doing his due diligence, Mr. Martin was able to absolve the subcontractor and discover that the general contractor, in fact, was the one responsible for the improper work that contributed to the fire. As a result, the subcontractor went from being despondent at the apparent end of his career, to being vindicated, both in the eyes of the law, and the eyes of his peers in the industry.

Outside of work, Mr. Martin and his wife are involved with several charitable organizations, including Charity Newsies, which clothes needy children of school age. As a former newspaper carrier himself, Mr. Martin feels that this charity holds a special connection for him. Additionally, he contributes to Nationwide Children's Hospital's Family Center for Safety and Healing, which deals with people escaping abusive situations. He is also a contributor to BOTA, the American Board of Trial Advocates, whose members join by invitation only. As a non-lawyer, Mr. Martin is particularly honored to be able to contribute his skills to the organization. Mr. Martin even finds time to give back to his high school, though he is many years graduated from it.

The role that family plays in Mr. Martin's life is perhaps greater than he realized, he said. Though his own parents divorced while Mr. Martin was very young, his mother was a very disciplined person and instilled within him the value of hard work. Meanwhile, his in-laws were very loving people, and taught him that true love conquers all. When he returned from Vietnam, his family came to his side, as he struggled to deal with the experience.

Mr. Martin wants people to know that architecture impacts people's lives in a very profound way. From playgrounds to skyscrapers, buildings are the lifeblood of the modern city, and their construction is both intricate and vital. It is Mr. Martin's mission to make sure that all aspects of construction fit together perfectly and safely. For this reason, Mr. Martin is surely deserving of the Star Treatment. 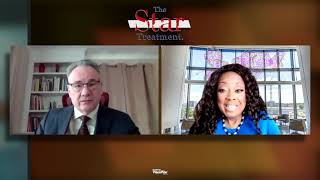