A prolific author, Dr. Klinger's influence has been showcased at numerous college campuses and organizations worldwide

PORTLAND, OR, April 12, 2021 /24-7PressRelease/ -- Prof. Eric Klinger, PhD has been included in Marquis Who's Who. As in all Marquis Who's Who biographical volumes, individuals profiled are selected on the basis of current reference value. Factors such as position, noteworthy accomplishments, visibility, and prominence in a field are all taken into account during the selection process.

For Professor Eric Klinger, PhD, an accomplished educator and researcher in the field of psychology for more than five decades, the journey to success was one of great perseverance in the face of obstacles.

Born and raised in Vienna, Austria prior to World War II, he was separated from his family and fled as a refugee from the country. He spent four years in Sydney, Australia, with his mother and uncle, after which they were able to reunite with his father in the United States in 1943 when he was just 10 years old. Naturally, this turbulent upbringing left a mark on him that never left and fueled many questions, which played a part in his gravitation toward the study of how humans think and act. Attributing his success to curiosity from a young age and an excellent education, Dr. Klinger earned a Bachelor of Arts in Social Relations and graduated magna cum laude from Harvard University in 1954.

Dr. Klinger served as a research associate at the Association of American Medical Colleges and a clinical psychology trainee at Edward Hines, Jr. VA Hospital between 1954 and 1960—during which time he also continued his education at the University of Chicago, where he ultimately obtained a Doctor of Philosophy in Psychology in 1960. Upon graduation, he became an instructor in psychology at the University of Wisconsin-Madison, remaining in the role from 1960 to 1962. He then transferred his expertise to the University of Minnesota, Morris, advancing from an assistant professor of psychology to an associate professor between 1962 and 1969. He became a full member of the teaching faculty at the university in 1969 until his retirement in 2006, at which point he was bestowed the honorary title of Professor Emeritus. In addition, he served as a Coordinator of Psychology Discipline at the university from 1962 to 2006, and was a member of the specialized research faculty at the Institute of Transpersonal Psychology in Palo Alto, California, from 2008 to 2010.

Dr. Klinger has found much success with his written works, contributing numerous articles and reviews for professional journals, chapters to books, and serving as a manuscript reviewer for more than 45 journals and texts. He has also authored many books, including "Structure and Functions of Fantasy" in 1971, "Meaning and Void, Inner Experience and the Incentives in People's Lives" in 1977, and "Daydreaming" in 1990. A dedicated member of the advisory and editorial board for Imagination, Cognition, and Personality since 1981, he has lent his editing expertise to "Imagery: Concepts, Results, and Applications," "Encyclopedia of Psychology," and two editions of "Handbook of Motivational Counseling: Concepts, Approaches, and Assessment," among others. Through his writings and research, he has made significant contributions to psychology, namely the goal theory of current concerns and mind flow—which he is most proud of professionally and would like to be remembered for. Additionally, Dr. Klinger is proud of his contribution in identifying the role of alcohol in problematic behavior as a result of him and his colleague, W. Miles Cox, influencing thinking in that field.

As a testament to his impressive achievements, Dr. Klinger has received numerous grants from universities and institutions, as well as the Horace T. Morse Amoco Award in 1972; recognition as an "Outstanding Teacher in Undergraduate Psychology" from the Minnesota Psychological Association in 1990; a Faculty Research Award from the University of Minnesota, Morris in 2000; and several inclusions in Who's Who publications and the Dictionary of International Biography. Staying abreast of his ever-evolving field, even in retirement, he has been affiliated with numerous organizations, serving as president of the American Association of Mental Imagery from 1980 to 1981, and a member of the Academy of Distinguished Teachers, the American Association of University Professors, the Society for Personality and Social Psychology, the Minnesota Psychological Association, and the Association for Research in Personality, among others.

Despite all that he's accomplished, Dr. Klinger considers his greatest achievement to be "marrying the right woman" in 1960, Karla Ann, and having three children with her. 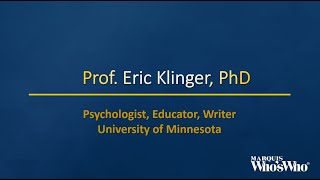