Ms. Oberbillig has been the founding sponsor of the Martin Luther King, Jr. National Memorial in Washington, DC since 2005

OLYMPIA, WA, April 12, 2021 /24-7PressRelease/ -- Molly Oberbillig has been included in Marquis Who's Who. As in all Marquis Who's Who biographical volumes, individuals profiled are selected on the basis of current reference value. Factors such as position, noteworthy accomplishments, visibility, and prominence in a field are all taken into account during the selection process.

Born in Gibraltar in 1934, Molly Oberbillig and her family moved to the United States a year later; she valued fairness for herself and others from a very young age. At nine years old, she had an altercation with neighborhood bullies, in which they invaded her property and held her captive—however she did not comply. In fact, she stood up for herself and punched one of the boys. She has been fighting for equality and justice ever since.

Ms. Oberbillig, the founding sponsor of the Martin Luther King, Kr. National Memorial in Washington, D.C. since 2005, has worn many professional hats for more than 60 years—all of which have been centered on civic and progressive issues. She has always had an interest in conservation, which may have been hereditary; her great uncle, who was born the same day as her, created the Rural Electrification Administration of 1935 under President Franklin D. Roosevelt. Through dedication, hard work, and a passion for helping others, Ms. Oberbillig balanced a strong education with significant professional contributions.

Between 1951 and 1964, Ms. Oberbillig completed coursework at Reed College in Oregon, Antioch College in Ohio, the University of Washington in Seattle, Washington, and San Jose University in California. In 1975, she became the conservation manager of the Mason County Public Utility District, a role she maintained until 1990. In the midst of that position, she also found success as secretary of the Mason Council Fire District from 1979 to 1981 and a founding trustee for the Anne Williston Scholarship from 1988 to 2007. In 1991, she served as vice chairman of the Democratic Central Committee, and has been a member of the Leadership Council within the Southern Poverty Law Center since 1992, the founder and chairman of the Thurston Council on Culture Diversity and Human Rights since 1995, a sustainer of Rural Advancement Fund International since 1995, and charter member of the National Women's History Museum since 2003. In addition to her work with the national memorial, Ms. Oberbillig has also been active as board treasurer for the All Souls Unitarian Church since 2010 and a charter member of the Wellstone Action Leadership Council since 2012.

While she has been proud of all the work she's done throughout her career, Ms. Oberbillig considers her shining achievement to be her contributions as founder and chairman of the Thurston Council on Cultural Diversity and Human Rights, through which she developed the Youth Diversity Award to recognize exceptional students and teachers. One year, the award went to a third grade teacher and class that took in, accepted, encouraged, and helped guide a blind child, which included learning Braille and math using an Abacus. The experience of interviewing all of them for the award was an enriching experience for her and one she will always cherish.

Hoping to be remembered as someone who was always fair and dedicated, Ms. Oberbillig enjoys gardening and spending time with her family, which includes her husband of 60 years, Gary, and their two children and three grandchildren. 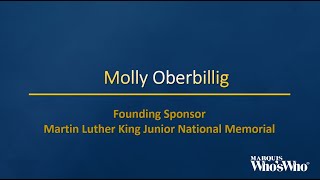