Setting himself apart as an expert in multiple disciplines, Mr. Rorick has received numerous accolades in his career

SOUTHBURY, CT, April 12, 2021 /24-7PressRelease/ -- William C. Rorick BA, BM, MM, MLS, MA, has been included in Marquis Who's Who. As in all Marquis Who's Who biographical volumes, individuals profiled are selected on the basis of current reference value. Factors such as position, noteworthy accomplishments, visibility, and prominence in a field are all taken into account during the selection process.

A dedicated and impactful music educator, librarian, historian, and writer with more than three decades of professional experience, William C. Rorick, BA, BM, MM, MLS, MA has illuminated the lives of countless students and everyday people with his grand expertise in and around the arts. Now retired, Mr. Rorick reflects on a life and career marked by great accomplishments and unforgettable experiences.

Growing up in Elyria, Ohio, Mr. Rorick was initially drawn to a career in business; his father, Harold, was a traveler's insurance agent, and he saw his job and lifestyle as an inspiration. Upon graduating from Ohio Wesleyan University with a Bachelor of Arts in economics and business administration in 1963, he realized he was not the type of person who would thrive in a business environment. He didn't have to dwell on this for long, however, as he was drafted into the U.S. Army the following year, serving for two years in Germany. While in active duty, he was able to think on his own and decided he wanted to pursue a life in either art or music. When he returned from the service, he enrolled at the University of Utah, where he earned a Bachelor of Music in music history and literature in 1968; he wound up choosing music because it involved studying American, European, and Western compositions—which greatly interested him. Mr. Rorick then obtained a Master of Music in the same concentrations at Northwestern University in 1970.

Looking to take advantage of his degrees and training, Mr. Rorick launched his career as a curator, reference assistant, and office manager at the Manhattan School of Music Library, where he worked from 1970 to 1974. Inspired by the work he was doing, he expanded his skills with a Master of Library and Information Science from Pratt Institute in 1974 before becoming a music reference librarian at Queens College, City University of New York, excelling in this role from 1974 to 1996. However, his responsibilities within the music library wasn't contained to just one position; from 1974 to 1979, he found success as an instructor before advancing to the post of Assistant Professor from 1979 to 1996. In the midst of teaching, he continued his own education with a Master of Arts in Musicology from New York University in 1982. He further contributed to Queens College as a member of the Senate Nominating Committee within its Delegate-at-Large Arts Division from 1984 to 1986. Since 1996, Mr. Rorick has been bestowed with the honorable rank of Assistant Professor Emeritus.

Outside of his primary endeavors, Mr. Rorick has lent his services to the South Britain Conglomerate Church in Connecticut, where he sat on the Board of Deacons from 1998 to 2001 and was active as an historian in 2002. In addition, he contributed numerous articles and reviews on the history of music publishing to professional journals throughout the 1980s when he was going through tenure at Queens College.

Toward the end of his journey as a teacher, Mr. Rorick started to feel the artist in him rising to the surface. He decided to study portrait painting across various art schools and workshops and really began on his own work in 1990. He has since showcased his portraitures at venues and galleries, taken commissions, taught the art, and served as juror and show chairman at several art organizations. He remains extremely active as a painter, primarily of famous composers and other historical figures; he is currently working on a portrait of Ulysses S. Grant as well as conceptualizing one for Henry Longfellow based on an old black-and-white photo. His paintings reside in his house at the moment, but he has two portraits, Abraham Lincoln and Abner Doubleday, on display at the NYS Military Museum and Veteran's Research Center. Mr. Rorick hopes to find homes for all his paintings in museum or university settings. 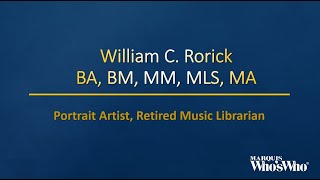