The owner of an award-winning childcare center, Ms. Sadaghian is also a member of the Irvine Childcare Association and Children's Home Society

IRVINE, CA, April 14, 2021 /24-7PressRelease/ -- Elle Sadaghian has been included in Marquis Who's Who. As in all Marquis Who's Who biographical volumes, individuals profiled are selected on the basis of current reference value. Factors such as position, noteworthy accomplishments, visibility, and prominence in a field are all taken into account during the selection process.

Driven by a kind heart and a love for helping others, Elle Sadaghian has dedicated her life's work to making the world a better place as the director of Little Angels Family Child Care—a learning facility where children up to the age of six are provided with "everything they need to prosper."

Raised in a large family in Iran, Ms. Sadaghian gravitated toward her eventual professional path because she has always loved children; although she never had any of her own, she decided early on she wanted to do something that would help impact young lives. Prior to embarking on that journey, however, she equipped herself with education and professional expertise, first earning a diploma in business in 1974 and a certification in accounting in 1975 in her home country. She launched her career as an accountant and accounting manager in Iran for 10 years before relocating to the United States.

Upon arriving in the new country, Ms. Sadaghian had to start from zero, which wasn't easy. She didn't want to go back to accounting and so she followed her heart—taking part in more than 200 hours of early childhood education workshops, acquiring licenses, and accruing experience babysitting, she and her sister, Azie, opened Little Angels Family Child Care in Irvine, California, in 2001. The mission of Little Angels has always been to help children prepare for the future, to "grow up to cooperate at times when it is not easy," "learn to solve their own problems," "learn to relate successfully to each other," and "take responsibility for themselves." Both educated and experienced, the Sadaghian sisters provide a loving and happy environment for children, emphasizing personal and intellectual development and getting them involved in exercise, yoga, painting, and dancing, in addition to many other activities. In addition, Little Angel supplies fresh and organic fruits and vegetables for every meal and is even the only child care center with a Kangen machine, a medical device from Japan that produces fresh Alkaline water.

Although she has a strong personality in business, when it comes to parents and their children, Ms. Sadaghian has a deep respect for their feelings, emotions, and expectations. She even keeps in touch with the children she cares for after they leave and has taken yearly class photos with the kids from 2007 to 2019, which she has framed in her office; she has so far seen more than 500 children come through the daycare. Looking toward the future of the business, Ms. Sadaghian and her sister are in the process of opening their third location, and she also hopes to travel throughout the world and help children without families feel love and grow to their highest potential.

Continually motivated by her love for helping others and caring for children, Ms. Sadaghian is a proud member of the Irvine Childcare Association and Children's Home Society. To those hoping to follow in her career footsteps, she stressed the importance of talking and listening to parents, respecting them, asking questions about their disciplines, and ensuring that each child is cared for in the best, most honest, and loving way possible.

Ms. Sadaghian hopes to be remembered by others for her dedication and generous nature. 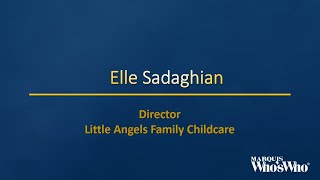