Dr. Dudzinski encouraged her students to never stop trying to make their communities and planet better, safer, and healthier

MARIETTA, OH, April 14, 2021 /24-7PressRelease/ -- Dr. Diane Marie Dudzinski has been included in Marquis Who's Who. As in all Marquis Who's Who biographical volumes, individuals profiled are selected on the basis of current reference value. Factors such as position, noteworthy accomplishments, visibility, and prominence in a field are all taken into account during the selection process.

Fueled by hard work, perseverance, and a love for working with others, Dr. Diane Marie Dudzinski has built an accomplished career as an educator with expertise in marine biology, microbiology, ecology, and environmental science. Although she officially retired from teaching in 2012, her impact and messages of hope and optimism over the course of nearly 50 years continue to be felt.

Born and raised on a dairy farm in Erie, Pennsylvania, Dr. Dudzinski grew up in a supportive and encouraging family. Throughout high school, she was inspired by her wonderful teachers, especially in the science department—a subject she naturally gravitated toward. When she attended Villa Maria College, now part of Gannon University, one of her professors, Sister Raymond Marie Bohr, who taught biology, told her that she was more advanced than the other students, and so she was bumped up to junior classes. At the time, she was not sure whether she wanted to pursue a career in biology or chemistry, as she was passionate about both fields. After earning a Bachelor of Science in 1968, she continued her education at Fordham University, where she served as a laboratory assistant and teaching fellow, and ultimately obtained a Master of Science and a Doctor of Philosophy in 1970 and 1974, respectively.

In the midst of her studies at Fordham, Dr. Dudzinski also taught at Ladycliff College from 1970 to 1971 before becoming a full-time biology professor there. She also took up teaching jobs at Pace University from 1972 to 1973 and Manhattan College from 1973 to 1975; she advanced from an instructor to an Assistant Professor of Biology at Manhattan College from 1975 to 1978. She subsequently found success at College of Santa Fe, occupying the roles of Associate Professor, Professor, and Chairperson for the Department of Science and Mathematics between 1978 and 1986. She lent her expertise as a biology educator to Mercyhurst College from 1986 to 1991 and inspired students for the rest of her career as Professor of Biology at Washington State Community College from 1991 to 2012. She began her last post by establishing a biology curriculum, as well as nursing and pre-health majors, which she saw as an exciting challenge to offer students something they had not been exposed to before.

Always brimming with happy energy and a great belief in the younger generation, Dr. Dudzinski encouraged her students to never stop trying to make their communities and planet better, safer, and healthier. She has been able to witness the direct results of such motivation to this day as one of her former students and neighbor, inspired by her words in the classroom, has dedicated herself to helping fight the COVID-19 pandemic.

Outside of her primary responsibilities in the classroom, Dr. Dudzinski served in the field as a consultant in Environmental-Medical Laboratories in Ruston, Louisiana from 1979 to 1980 and in the study of controls for environmental pollution in Santa Fe from 1979 to 1981. She also earned an American Society of Science Educators Fellowship at the NASA Ames Research Center in the summers of 1982, 1983, and 1984 and worked on Closed Environment Life Support Systems at Stanford University in preparation for the space station and working on microbial contaminations that might occur. Her proudest moment, though, was when she was named as the first woman participant of the joint U.S.-USSR Bering Sea expedition. She has remained connected to her professional life as a longtime member of the American Institute of Biological Sciences, the American Association for the Advancement of Science, the American Society for Microbiology, the Society of Protozoologists, the Pennsylvania Academy of Science, and the New Mexico Network for Women in Science and Engineering.

In recognition of her contributions to science and education, Dr. Dudzinski accepted a Distinguishable Alumni Award from Villa Maria College in 1986 and a 50-Year Award from Gannon University in 2019. She has also received grants from the National Institutes of Health and the National Science Foundation.

Now spending most of her time snorkeling, swimming, gardening, traveling, and collecting antiques, Dr. Dudzinski hopes to be remembered by her peers as someone who inspired others to take an interest in the subject of biology and caring for the planet, as well as took her words of advice to heart, especially that "lifelong learning is important." To those trying to make something of themselves professionally, she encouraged that they be committed to their goals, enjoy what they're doing, and always strive to be kind to people. 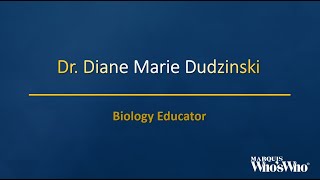