David Plowden Recognized for His Talent as a Photographer

Mr. Plowden's photographs are on display in a number of prominent collections

WINNETKA, IL, April 14, 2021 /24-7PressRelease/ -- David Plowden has been included in Marquis Who's Who. As in all Marquis Who's Who biographical volumes, individuals profiled are selected on the basis of current reference value. Factors such as position, noteworthy accomplishments, visibility, and prominence in a field are all taken into account during the selection process.

A gifted photographer, writer, and educator with more than 55 years of professional experience to his name, David Plowden has always prided himself in being hard working, diligent, and extremely collaborative with others. When it comes to his devotion to his craft, he said, "You have to believe I something and dedicate yourself to it and make sure that you do a good job—that is most important."

Born and raised in Boston, Massachusetts, Mr. Plowden completed high school and subsequently earned a degree from the Putney School in Vermont in 1951, followed by a Bachelor of Arts in Economics at Yale University in 1955—studying photography at both institutions. In order to support himself and make a living, he worked for the Great Northern Railway in Willmar, Minnesota, from 1955 to 1956, during which time he further developed his passion for taking photographs. When he started out with the railroads, he witnessed the disappearance of so many things that people took for granted at the time and so he wanted to devote himself to capturing the steam engine as one of the great achievements of man—which was being replaced by the diesel. Under his employment, he was assigned to the regional division that had the last steam locomotives in operation, so the first photographs he took were of these hulking transport vehicles on the railroads, which was a major undertaking. He began to take advantage of his work environment, getting permission from the railroads to snap away whenever he felt inclined. While there, he also began mentoring one of his assistants, Edward Remy, whose father was a chairman of the steel mill, in photography and printing his work. The deal he made with Edward was that he would show him all he could about printing in exchange for a spot on his father's mill when he went to Chicago, which employed about 25,000 people. Throughout all of this, he kept taking gorgeous photos of his beloved trains and engines—he even compared himself to a groundhog because he loved being in the darkroom so much.

Although he thought he was going to be a railroad person for life, Mr. Plowden went to New York in 1957 and took a job with the American Express Company as a travel clerk for a year. Following this brief appointment, he went to work as a photographer's assistant for O. Winston Link Studio, the headquarters of a renowned railroad photographer, from 1958 to 1959. He then held the same role at George Meluso's studio until 1962, at which point he went out on his own as an independent photographer. In addition to devoting himself to his art, he has excelled as an educator since 1978 when he first became a Visiting Associate Professor at ITT Institute of Design in Chicago. He quickly advanced to the role of Associate Professor there from 1980 to 1985 before serving as a lecturer at the School of Journalism within the University of Iowa from 1985 to 1988. Mr. Plowden continued in this capacity as an artist-in-residence and senior fellow at the Institute for Publications Design and Yale Gordon College of Liberal Arts within the University of Baltimore from 1990 to 1991 and excelled as a Visiting Professor within the Communications Arts and Humanities Division at Grand Valley State University from 1988 to 2007. He adored teaching and used to take the students into the field because he felt he couldn't teach the on a blackboard.

As a photographer, Mr. Plowden has spent his career documenting the changes that have occurred to small towns. His work has been displayed across several galleries, venues, and institutions. Selected photographs of his reside in permanent collections at the Albin O. Kuhn Library and Gallery within the University of Maryland; the Albright-Knox Art Gallery in Buffalo; the Art Institute of Chicago; the Beinecke Rare Book and Manuscript Library at Yale University; the Buffalo and Erie County Historical Society; the Burchfield Art Center; the California Museum of Photography; the Center for Creative Photography at the University of Arizona; the Chicago History Museum; the Figge Art Museum; the Speed Art Museum in Louisville; the Library of Congress in Washington, D.C.; the Museum of Contemporary Photography in Chicago; the State Historical Museum of Iowa; and the University of Virginia Art Museum.

As a testament to his success, Mr. Plowden was honored with a Benjamin Barondess Award for Lincoln and His America in 1971, a Wilson Hicks Award for Outstanding Contributions to Still Photography in 1977, a Railroad History Award for Significant Contribution to the Photographic Interpretation of North America's Railroading History in 1989, and an Honored Image Maker Award from the Society of Photographic Education in 2002. He has also been a longtime member of the American Society of Media Photographers.

Upon reflection of his career, Mr. Plowden has been most happy with his wife of more than 40 years, Sandra, his two children, nine grandchildren, and three great-grandchildren. 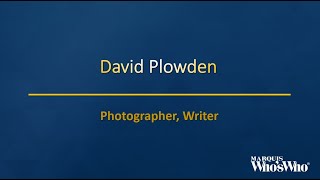