Gloria Bieber Honored for Excellence as a Psychic

Renowned as an international psychic, Ms. Bieber encourages others to follow "a higher source"

CALGARY, AB, April 14, 2021 /24-7PressRelease/ -- Gloria Bieber has been included in Marquis Who's Who. As in all Marquis Who's Who biographical volumes, individuals profiled are selected on the basis of current reference value. Factors such as position, noteworthy accomplishments, visibility, and prominence in a field are all taken into account during the selection process.

With a positive outlook and a mission to educate people on the importance of connecting with energies around them, Gloria Bieber has dedicated her professional life to transcendental meditation, mediumship, metaphysical training, holistic healing, and photography as the Chief Executive Officer and founder of Aura Chakra Imaging. In relation to these practices, she has also found much success as a writer and a clairvoyant in the field.

Born in Calgary, Alberta, Canada, Ms. Bieber gravitated toward her professional path at a young age when she discovered she had the ability to, in her own words, "see into the other world." She knew things ahead of those her own age and beyond; for instance, she was able to communicate with her grandparents, who had passed away. She grew up in a family that was engaged in meditation and metaphysical research throughout her upbringing, and even had a chance to meet the Dalai Lama as a child, who instilled in her an even better perspective on life. She learned early on the importance of being able to see the bigger picture—"No matter how negative things may appear and even though you might not be able to understand it at the time," she said, "you will as time goes by."

In 1980, Ms. Bieber launched her career as the owner and operator of Little Flower Janitorial, a business that prospered up until 1996. In the midst of her role, she pursued a higher education at the University of Calgary, where she studied within the management development program with focuses on business administration, management, and operations. In 1989, she earned a Personnel Administration Diploma in Human Resources Management/Personnel Administration from the university. Equipped with a degree and an additional HR Management Certificate, she continued her professional journey as the Human Resources Manager of The Hudson Bay from 1987 to 2004, the Human Resources Benefits Administrator of Canada Safeway from 2005 to 2012, and the Intuitive Counselor at Out Angels Center for Well Being from 2007 to 2015. Since 2007, Ms. Bieber has established herself as an international psychic through her services at the Metaphysical Centre of Canada, an alternative and holistic health service provider based in Calgary.

With a specific expertise in metaphysical studies through the science of mind and both theoretical and practical development of spiritual languages in order to communicate with spirits and angels, Ms. Bieber has excelled as a wellness counselor who prides herself in teaching her clients the importance of self-healing within the mind, body, and soul. She educates people about "a higher source," which she defines as the space everyone comes from, where everyone is connected. Through her teachings, she hopes her clients can find a way to speak to others in harmony as opposed to conflict or anger. In addition to her courses, Ms. Bieber has lent her expertise through numerous published articles in Rising Woman Magazine and contributions to the book, "Your Invisible Bodies" authored by Sharon Montgomery in 2009. She has also been interviewed by several news outlets and radio shows, has made appearances at body and soul spirit expo events, and has released short videos on her techniques for YouTube.

Over the course of her accomplished career in her field, Ms. Bieber has been honored with a Spiritual Wellness Award, a Women of Distinction Award, Canada's CMA Awards Celebrity Gifting Suite in 2014, an Emmys 2014, 2015, and 2016 Celebrity Gifting Suite, and has been recognized by such publications as Who's Who and the Princeton Global Registry. Looking toward the future, she hopes to continue the work she is currently doing—with the addition of training workshops and lectures, which she hopes can further bring people to a better understanding about life, and provide hope and awakening. 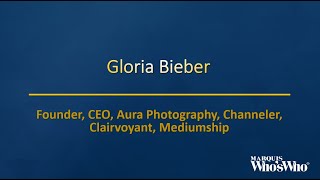