NEW YORK, NY, April 15, 2021 /24-7PressRelease/ -- Shara Sand, PsyD has participated in The Star Treatment, a prestigious video series hosted by renowned lawyer and television personality, Star Jones. This premier video series is extremely limited — Marquis Who's Who qualifies 500 listees on an annual basis for this elite service. Backed by a storied career in media that spans more than two decades, Star works closely with Marquis listees to assist with networking goals and commemorative efforts that can be shared with a worldwide audience.

Dr. Sand, a psychologist who dedicated her professional career to advocating for marginalized individuals, started her career with a strong interest in music. "It really a very different journey than most people," admitted Dr. Sand. She wanted to play the guitar since she was a young girl, but she moved into the trumpet in elementary school. When her band leader needed a trombone player, Dr. Sand took up the call and learned the instrument, taking her music studies all the way to college. "One of my many day jobs was at a psychotherapy institute," Dr. Sand said, and the institute would train people to become therapists to help people in need. After a recession in the 1980s, Dr. Sand decided to depart from her career of becoming a professional musician and transform herself into a psychotherapist. She likens the process of therapy to music, saying that the process is really just "two people sitting in a room getting attuned."

Since becoming a therapist, Dr. Sand noticed that enormous value has been added to her field by the area of neuroscience, which has contributed a great deal of knowledge and relevance to how we view the connectivity of brain chemistry and emotions. In particular, Dr. Sand is fascinated by mirror neurons, which fire when one sees empathic activity in others. This can shape the behavior and growth pattern of children's brains and lays the framework for effective development.

"I love working with college students," said Dr. Sand. Part of her feels that it is her inner adolescent that allows her to relate so well to college-aged students. Additionally, Dr. Sand cites her LGBT identity as a factor that gives her something to offer to that community. Having lost many friends during the AIDS epidemic, Dr. Sand spent the first few years of her career working with HIV/AIDS patients, providing "hospice of the mind," as Star put it.

While Dr. Sand has not done what she calls "hard-core" research in many years, she has presented to the American Psychological Association across a number of divisions, as well as a great many other professional societies and organizations. A modest person by nature, Dr. Sand was hesitant to discuss her own accolades, noting the irony of a brass player being unwilling to toot her own horn. Nevertheless, she holds an impressive number of awards and recognitions from the various organizations to which she has presented.

One of the most important aspects of Dr. Sand's work is providing help to those who need it, even if they cannot necessarily afford it. Seeing people denied care due to cost is a pet peeve of hers, and she often does pro bono work for clients who are undergoing hardship. A generous and caring professional, who puts her patients' health on the highest possible level, there is no doubt that Dr. Sand is worthy of the Star Treatment. 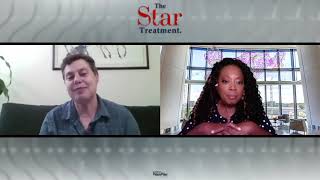