Ms. Gillman sits with Star Jones to explore her deep passion for teaching

TEANECK, NJ, April 15, 2021 /24-7PressRelease/ -- Joan Ava Gillman has participated in The Star Treatment, a prestigious video series hosted by renowned lawyer and television personality, Star Jones. This premier video series is extremely limited — Marquis Who's Who qualifies 500 listees on an annual basis for this elite service. Backed by a storied career in media that spans more than two decades, Star works closely with Marquis listees to assist with networking goals and commemorative efforts that can be shared with a worldwide audience.

Ms. Gillman, a dedicated educator, has had to make many changes to the way she teaches as a result of COVID-19. Switching to total remote learning has been a major shift for her, though the technology was thankfully cooperative, at least for the most part. "Sometimes we would run into technical trouble," she admitted, remembering instances where the children would be frozen on screen. In this case, old fashioned solutions proved best, as she would encourage students to connect by phone if they could not do so via video chat. The main challenge was keeping her high enthusiasm for working hands-on with students while distance learning. Through her innovation and quick thinking, she was able to incorporate fun activities into the educational curriculum, for example, when she encouraged her students to save seeds from fruits and vegetables so they could plant them together, while apart.

An inventive and creative teacher, Ms. Gillman was quick to show Star some of the projects her young students were working on, such as sunflower dough dinosaurs and fossils, made by mixing a soft dough, forming impressions, and baking it in the oven. Citing her love of dinosaurs, Star was thrilled to note the species of the dinosaurs that the students had created.

"I went to one of those progressive high schools," said Ms. Gillman, recounting her early years. She was allowed to work at her own speed, and she took up tutoring in the lower school, as well as teaching recorder lessons, substitute ballet lessons and swimming classes. In the process, she discovered her passion for teaching and decided to enter the field. Later, in Felician College, Ms. Gillman relished the opportunity to witness teachers holding lessons in real time. She graduated summa cum laude, and pursued her master's degree at NYU, picking up sign language in the process. Even to this day, she fondly remembers her student teaching experience at P.S. 47 Junior High School for the Deaf in New York. She was working with students who were profoundly deaf, and, as a result, had typically underdeveloped reading skills. Using a fun, hands-on approach to the lessons, Ms. Gillman and her supporting teacher were able to guide the students in some truly impressive projects.

Not one to limit her talents to one world, Ms. Gillman also has experience working with NASA. She participated in the Lunar Workshop for Educators, which presented the teachers with a wealth of information about our closest satellite, and in 2015 she became a M.A.V.E.N. (Mars Atmospheric and Volatile EvolutioN) ambassador to NASA, tasked with discovering what had happened to the atmosphere of the red planet. Additionally, she is a member of many educational societies and organizations, and she keeps her skills sharp through continuous learning. She is a certified National Geographic educator, having accomplished this feat in order to model the behavior that her students should become lifelong learners. With a true passion for education, and a calling for sharing knowledge, Ms. Gillman is training the next generation to become the stewards of our planet. With that mindset, and her years of experience, there is no doubt that Ms. Gillman is worthy of the Star Treatment. 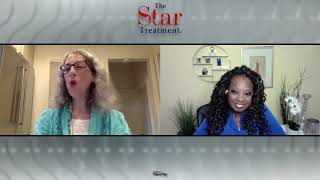