Dr. Hayden-Wing has led an accomplished career in wildlife research and education

LARAMIE, WY, April 21, 2021 /24-7PressRelease/ -- Larry D. Hayden-Wing, PhD has participated in The Star Treatment, a prestigious video series hosted by renowned lawyer and television personality, Star Jones. This premier video series is extremely limited — Marquis Who's Who qualifies 500 listees on an annual basis for this elite service. Backed by a storied career in media that spans more than two decades, Star works closely with Marquis listees to assist with networking goals and commemorative efforts that can be shared with a worldwide audience.

For as long as he can remember, Dr. Hayden-Wing has been enamored by the outdoors. Growing up in Iowa, he was encouraged by his parents to explore nature—which he did as much as he could on his own. However, throughout his formative years and early schooling, he had great and inspiring teachers who guided his interests in natural resources. In high school, he trimmed trees, worked for contractors and a nursery, and even lied about his age when he was 16 in order to work in Washington State for a summer, in the blister rust control program for the U.S. Forest Service. Upon graduation, Dr. Hayden-Wing pursued an education at the University of Idaho and began his journey into a field he has excelled in for more than 60 years, in the roles of an educator, a consultant, a researcher, an author, and a wildlife biologist.

In the midst of earning a Bachelor of Science in Forestry and Wildlife Conservation from the university, he continued working for the forest service in the summer, during which he surveyed roads, smoke jumped, smoke chased, and overall became acquainted with the forest—which he referred to as "a great teacher." When he obtained his degree in 1958, he was determined to go out and see more of the world, but he was sidetracked by an obligation to serve in the U.S. Navy. For two and a half years, he served in many roles, and ultimately gained the rank of Lieutenant, and absorbed several principles that he would take with him throughout his career, including the importance of telling the truth. After completing his military duty, he returned to his alma mater, where he obtained a Master of Science in Wildlife in 1962.

On the hunt for a job in his field, Dr. Hayden-Wing happened upon an ad seeking someone with a PhD to travel to Africa to study elephants. Although he wasn't equipped with the degree, he interviewed with the employer anyway; he proved to be so impressive that the interviewer decided that he was the right candidate for the appointment. He became a wildlife researcher in Uganda and East Africa, where he studied elephants and lived in a tent in a forest. When he returned, he pursued his Doctor of Philosophy at the University of Idaho, and was simultaneously active as a wildlife research associate for its College of Forest, Range, and Wildlife Resources—studying on high-mountain meadows in wilderness areas and accumulating experience with bears, lions, elks, deer, moose, and horses. "It was just heaven," he later said of this time. With a PhD in wildlife ecology in 1969, he lent his expertise as an assistant professor of animal ecology and wildlife conservation at Iowa State University up until 1972 when he became an associate professor.

Dr. Hayden-Wing continued his teaching career at the University of Wyoming—though he was initially offered a job there as a department head, he turned down an administrative role in favor of "being part of the team." He was active as an associate professor of wildlife ecology and management for a year, from 1977 to 1978, before transitioning into the next phase of his professional life operating his own private practice—first as the director of the wildlife division at Mine Reclamation Consultants and then as chief executive officer, owner, director, and principal scientist at Hayden-Wing Associates, based in Laramie, from 1980 to 2009. In addition to his research and consulting, he has found a professional avenue in writing—for which he developed a passion while writing dissertation and term papers in college. On top of more than 45 scientific and technical papers, he has written a number of books, including "Elephants and Forests" in 1970, "Wildlife Conservation Manual" in 1972, "In the Footprints of Elephants: Accounts and Memoirs of a Wildlife Scientist"—a chronicle of his life and experience with animals based on journals he kept while in Africa that spans 450 pages and 200 color photographs published in 2012—and "Never to be Repeated: A Ride Through Life" in 2016. He also co-edited "North American Elk" in 1979. Upon reflection of his adventures, Dr. Hayden-Wing said, "I've done so many things that most people will never have the chance to do that I wanted to tell about."

On top of his primary appointments, Dr. Hayden-Wing has served as an expert witness for legal proceedings across several states, a member and a presenter for the People to People Ambassador Program in China and an affiliate of the Wildlife Society. In 1986, he was the principal inventor and senior author of "A Wetland Evaluation Model for Quantifying Functional Values for Waterfowl." Happily married with three children and four grandchildren, he hopes to instill the following message to future generations of professionals: "Don't be afraid to pursue what you want to do and be. And if you don't succeed immediately, keep trying. You'll either succeed or get deflected off into another adjacent area that might be where you belong…but you've got to keep trying." 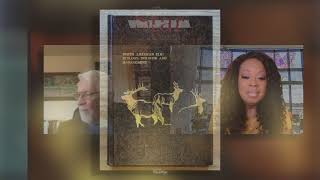