Barak Zilberberg Gets the Star Treatment!

Through optimism, compassion, and a love for people, Mr. Zilberberg's energy has powered his career in real estate

LAS VEGAS, NV, April 27, 2021 /24-7PressRelease/ -- Barak Zilberberg has participated in The Star Treatment, a prestigious video series hosted by renowned lawyer and television personality, Star Jones. This premier video series is extremely limited — Marquis Who's Who qualifies 500 listees on an annual basis for this elite service. Backed by a storied career in media that spans more than two decades, Star works closely with Marquis listees to assist with networking goals and commemorative efforts that can be shared with a worldwide audience.

For over 30 years, Mr. Zilberberg has utilized his open-minded, selfless, and compassionate personality to help people from all walks of life find success and happiness through his roles as a real estate investor at Bendz Enterprises, a realtor at Pinnacle Estate Properties, a landlord, property owner based in California, Nevada and New York. Always people-minded, he has strived to give back and provide a service that individuals, families needed, poring his heart, soul, and creativity into a business that looks out for its clients' best interests, goals, dreams, and satisfaction. "It's all about the people," he said. "It's about giving them a nourishing and inviting environment. It never was about the money for me, but giving good energy, good vibes, and serving others." Mr. Zilberberg's current company, Zilberberg International, is a real estate company that deals with all aspects of real estate ventures, including management. Mr. Zilberberg has worked with all races, religions, colors, origins, nationalities, genders, sexual orientations, for the love of people, humankind. "We are all people: we come and leave the same way. It's important what we do in-between our span of LIFE from start to finish. I believe we are all here to serve a purpose, each and every one of us is very talented, special within ourselves. Practice kindness, respect, integrity, love, for one another. My specialty is to bring people together, make great wonders, movements, miracles, and last but not least make PROBLEMS INTO SOLUTIONS!"

The Zilberberg Foundation, which he founded in 2021, is focused on helping the homeless by providing education and hope for the future, in order to help the less fortunate escape their present circumstances and strive to pursue a better life for themselves. Additionally, the foundation helps children suffering from health problems, to give them a positive outlook that will propel them to a full recovery.

Born and raised in Los Angeles, Mr. Zilberberg learned the ins and outs of his profession from a young age; when he was 10, his father—who was endeavored in real estate himself—would wake him up early every Sunday and put him to work on properties, from laying out tiles to changing faucets. While it was initially a challenge, he was able to complete his duties and learned to roll up his sleeves, make repairs, and build his foundation of a strong work ethic, which was something he carried with him when he embarked on his career in selling and supervising properties. As a further preparation for his career in real estate, he started out as the owner of a successful plumbing company, through which he honed his skills and knowledge as a tradesman and cemented his principles surrounding property owners and both commercial and non-commercial tenants. Mr. Zilberberg gravitated toward plumbing because he knew homeowners needed help with leaks and stoppages, all of which he became good at over the course of years of firsthand experience growing up; he eventually began investing in real estate and followed that up with joining the market.

When it comes to his clients and tenants, Mr. Zilberberg doesn't just consider them friends but members of his family. In laying out the key to success in his field and beyond, he said, "Always work with your heart. Work with your spirit, your mind, and your soul. Do the right things in life. Don't think about 'What's in it for me?' but what's in it for the people. The money or all that you wish or dream for will come your way. It will actually chase you, but think about what is right." Mr. Zilberberg is also gifted as a self-made success as a salesman, manager and consultant in the field of construction, and as a mentor to people in the world of real estate. He is also proud to be a self-made multi-millionaire. Through all his professional accomplishments, however, he considers of the highlight of his life to be his three children and two grandchildren, in whom he takes great pride and who serve as his motivation. He is also proud of his girlfriend, Apolonia Piña, who has earned real estate licenses in Nevada and California. Mr. Zilberberg has enjoyed being able to impart on his children his beliefs, teachings, and outlook that all people have value and deserve happiness. In his spare time, Mr. Zilberberg is a wine connoisseur and a health guru.

Speaking to young and budding professionals, Mr. Zilberberg assured them "I think you can achieve anything you'd like with confidence…you have to believe in yourself as a person, identify who you really are, and you have to connect with it—emotionally, mentally, spiritually, and physically. From there, you can spread goodness to others. I am for the people. If I can further enhance people's lives with knowledge that I have, why not share it?" 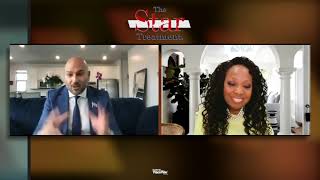