Kelly Kalama Honored for Service in the United States Army

TEMPLE, TX, May 04, 2021 /24-7PressRelease/ -- Kelly Kalama has been included in Marquis Who's Who. As in all Marquis Who's Who biographical volumes, individuals profiled are selected on the basis of current reference value. Factors such as position, noteworthy accomplishments, visibility, and prominence in a field are all taken into account during the selection process.

With 30 years of distinguished service to the United States Armed Forces, Kelly Kalama retired in 2019 as command sergeant major.

As a young man, Mr. Kalama was inspired by his father, who had spent 21 years with the U.S. Air Force, to pursue a military career himself. After graduating from high school, he immediately joined the United States Army, completing training in the Charlie Company of the Fourth Battalion's 16th Infantry Regiment in 1989. He joined the Airborne Company of the First Battalion's 507th Infantry in Fort Benning, GA in 1989. He became an 11C Indirect Fire Infantryman and also received special military training in enterprise organizational leadership and senior leadership. Further training included basic and advanced leadership, as well as master resilience training. He became a contracting officer for Air Movement Operations at the Sexual Harassment and Assault Response and Prevention Infantry School, and he completed a number of additional training courses, including an Air Assault Course, and Airborne Course and a Combat Life Savers Course. He holds two multiple purpose range certifications and has completed coursework at a Joint Readiness Training Center. Mr. Kalama is trained to function in cold weather, and has completed a master gunner small arms course. He is also a SHARP instructor and an MRT resilience and battle staff expert.

Over the years, Mr. Kalama has served in the 70th Infantry Regiment in Fort Polk, Louisiana, as an assistant gunner and gunner for the 107mm Mortar Section, during which time his unit was deployed to Desert Storm in Saudi Arabia. From there, he was assigned to various battalions, including the 1st Battalion, 72nd Infantry at Camp Casey Korea, where he completed two multiple purpose range certifications, the 2nd Battalion, 327th Airborne Infantry at Fort Campbell, through which he successfully completed Headquarters 101st Airborne Division course, and the 3rd Battalion, 325th Airborne Infantry at Vicenza, Italy, where he quickly advanced to the rank of sergeant. Throughout his career, he mobilized nine different battalions and brigades to deploy in support of Operation Iraqi Freedom and Operation Enduring Freedom and deployed as part of the first Heavy Combat Brigade.

In recognition of his bravery and service to the Army, Mr. Kalama has received a number of distinguished honors and awards, including the Saint Barbara Medal for his service in Kosovo and Operation Iraqi Freedom, and he was named to the Order of St. Maurice. He has also been named to 11th Regiment Honorary Rolls, and earned silver and gold spurs on his Legion of Merit award, as well as four Meritorious Service Medals, two Bronze Star Medals, six Army Commendation Medals, Joint Service Achievement Medal, nine Army Achievement Medals, one Regional Merit, Joint Meritorious Unit Award, two Valorous Unit Awards, an Army Superior Unit Award, eight Good Conduct Medals, two National Defense Medals, and a Korea Defense Service Medal.

Mr. Kalama has earned two Afghanistan Campaign Medals, two Iraq Campaign Medals, a Kosovo Campaign Medal, a Global War on Terrorism Service Medal, five Overseas Service Ribbons, Four NCO Professional Development Ribbons, an Army Service Ribbon, an Expert Infantryman's Badge, a Combat Infantryman Badge, a Parachute and Air Assault Badge, and two NATO Medals, not to mention the thanks of a grateful nation. When asked about his advice for future generations, Mr. Kalama offered the following: "love what you do enjoy the people around you. Pick your battles, and when you stop caring, find another job." 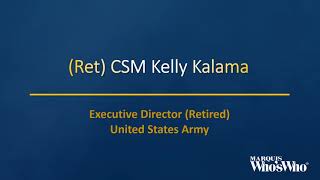