Ms. Gaut speaks to Star Jones about her company, Make a Joyful Noise

FAIRFIELD, CA, May 05, 2021 /24-7PressRelease/ -- Joan Karen Gaut has participated in The Star Treatment, a prestigious video series hosted by renowned lawyer and television personality, Star Jones. This premier video series is extremely limited — Marquis Who's Who qualifies 500 listees on an annual basis for this elite service. Backed by a storied career in media that spans more than two decades, Star works closely with Marquis listees to assist with networking goals and commemorative efforts that can be shared with a worldwide audience.

As a retired music teacher, Ms. Gaut grew up around music and endeavored to share her passion with others. The name of the studio came about when she was teaching elementary school. Other teachers would walk past the students at the beginning of the school year and complain about the sound of their singing. Ms. Gaut simply replied, "they're only required to make a joyful noise." This unintentionally Biblical comment would form the backbone of her career, as she spent her life trying to help students make their own joyful noise, in whatever way that was possible.

"I grew up in a little village of 250 people," said Ms. Gaut, referring to Richvale, California, "and with the particular makeup of that town, all of the children in that town began singing in the church when they were 2 [years old]." Ms. Gaut and the other children would have seasonal performances, and were given piano lessons early on. After a few years, they were given the opportunity to explore music by choosing their own instrument, though in practice this was often determined by what instruments their parents had available. In Ms. Gaut's case, it was the flute. As a result of this upbringing, the residents of Ms. Gaut's town all grew up with a strong background in music.

A woman of many talents, Ms. Gaut enjoyed a career as a school nurse, and later a music teacher for 30 years. She was deeply passionate about working with the students, and would pay close attention to their needs so that no medical problem went untreated. "I had envisioned that I was going to be a medical missionary," she said. And so, she continued with her musical work, so that she would be able to spend her weeks as a medical practitioner and spend her weekends sharing her musical talents, and in that way she would always be putting her talents to use.

Some of Ms. Gaut's proudest accomplishments come from seeing her students succeed. On one occasion, a student hugged her after a lesson, and said "I just love coming to music classes, because you give us hope." That in particular was a major highlight for her. Another student, despite severe dyslexia, has been successfully learning, by memorization, seven full songs, and is working on her eighth. This progress in the face of extreme adversity brought the student a great sense of confidence and, again, hope. "For me personally, [music] gives me great joy," said Ms. Gaut, who plays music each and every day. Ms. Gaut feels that schools do not yet realize the full value of teaching students music, and that it is a talent and a passion that will stay with them for their entire lives. With a heart full of joy and song, Ms. Gaut works to spread that joy far and wide, and that certainly makes her worthy of the Star Treatment. 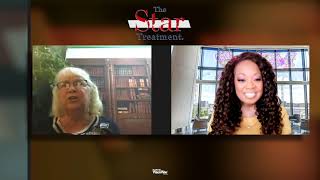