Dr. Killebrew achieved success as a cardiologist through hard work and the support of her colleagues

BELVEDERE TIBURON, CA, May 11, 2021 /24-7PressRelease/ -- Ellen Jane Killebrew, MD, has participated in The Star Treatment, a prestigious video series hosted by renowned lawyer and television personality, Star Jones. This premier video series is extremely limited — Marquis Who's Who qualifies 500 listees on an annual basis for this elite service. Backed by a storied career in media that spans more than two decades, Star works closely with Marquis listees to assist with networking goals and commemorative efforts that can be shared with a worldwide audience.

Dr. Killebrew, who has practiced in the field of cardiology for more than 50 years, began her interest in medicine at the age of 13, when she was ill with gastroenteritis. Her mother attempted to use home remedies to treat her condition, but nothing worked. Finally, she contacted the family doctor, who arrived after office hours, and opened his "magic bag" to produce vials of medicine. A short series of injections and pills later, and she was back in good health. This early experience left an indelible mark on Dr. Killebrew's mind, and from that point on, she wanted to become a doctor.

Of course, the reality of becoming a doctor is different than the whimsical dreams that Dr. Killebrew had as a teenager, but once she set down the road to her pre-med in college, she was well on her way to achieving her goal. Medical school was difficult, especially for a woman at that time. Dr. Killebrew recalls that there were no more than three other female students in her class, and they lived and studied together, supporting each other through the difficulties both with coursework and with the negative attitudes of some of their male counterparts in medicine. Dr. Killebrew and her colleagues overcame these hardships and, with each others' support, graduated to become doctors.

As a female cardiologist in San Francisco, Dr. Killebrew had a difficult time finding work, as most practices would not accept a woman into their ranks. She eventually found a position with a small Kaiser hospital. She enjoyed the work, but found that she craved a greater challenge, so she decided to start teaching at the University of California to keep her mind alert and her skills sharp. She also wrote several articles, some to fulfill the requirements of her cardiology fellowship, others to secure a fellowship with the American College of Physicians. She was fortunate to be able to partner with doctors at UCSF, who were happy to assist her in writing these papers.

As a heart disease survivor and thriver, Star was keen to get Dr. Killebrew's opinion on heart health tips. The results were about what one would expect: exercise regularly, keep blood pressure under control, quit smoking if applicable, and eat healthy, because diabetes is also another major concern. Taken together these tips will work wonders in preventing the onset of many cardiac conditions that pose a threat to women.

The field of cardiology, and indeed, medicine as a whole has changed greatly since Dr. Killebrew began practicing. In the early years, there were no coronary care units, no defibrillators, and no beta blockers, all of which are commonplace in modern cardiology. Dr. Killebrew witnessed the rise of CPR and its life-saving impact, which also helped improve patient outcomes. Overall, due to the changes she saw in the field, cardiac mortality was reduced from 35 percent to three percent.

Dr. Killebrew advises young doctors to follow and pursue their passions. Though there will be roadblocks, they can be overcome with hard work and dedication, and the good that a doctor is able to do through their work makes all of the sacrifice worthwhile. "The forefront should be the patient," Dr. Killebrew said, "patient care is all that really matters." 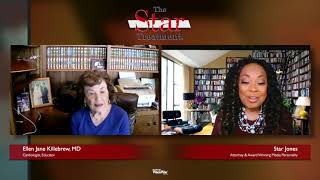